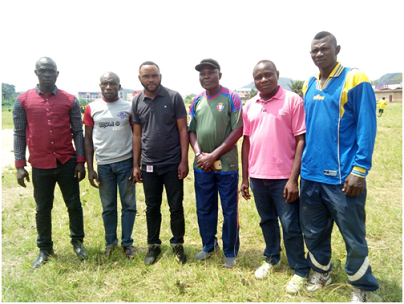 By Femi Atolagbe
|
The chairman of technical committee of Governor’s Cup tagged “Aketi Cup” Chief wande Fabuluje has urged the local government football council Chairmen to give maximum support to the main Organising committee of the competition.

The chairman, who was represented by a board member of the state football association, Apostle Samuel Lawani made the call during the continuation of the inspection tour of the committee to the Southern and Central Senatorial Districts of the state.

Fabuluje stated that the purpose of the tour is to have a successful competition across the three Senatorial Districts of the state by knowing what you will need for the successful hosting of your preliminaries in your respective local governments.

According to him, the competition which is organised by the (Klick Konnect networks) in partnership with ministry of youth development and sports is an avenue to bring out hiding talents in the youths .

We dont want some influential individuals to arrange their cronies from outside to represent your local governments without given opportunity to the grassroot which is the target of the organisers .

Dabo further added that the main organisers want the preliminary to produce formidable teams from the eighteen local governments, saying the competition is about discovery .

The Chairman of Akure South football Council ,Mr Aladenika Adetayo Sunday, who spoke on behalf of other Chairmen assured the organisers that the football council will organise a successful competition that everybody will be proud of .

Aladenika appealed to the organisers to expedite action on their request to organise a successful competition in their domain.

He said the organisers should adhere strictly to the rule that prevent  players playing in either amateur, pro and premier league from participating in the competition since the competition is about developing rockies from the grassroots.

“Talents are abound everywhere in Ondo State, these are the people the competition is all about ,so they must be given opportunity to express themselves

We must give them opportunity for us to have our share in the National team”.