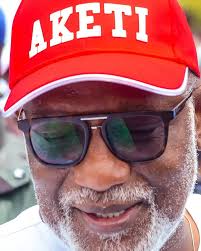 By Femi Atolagbe
|
The organizer of Governor’s Cup, tagged (Aketi Cup) Klick Konnect Networks in partnership with Ministry of Youths and Sports Development, Ondo state ,has taken the awareness of the competition to the forum of head of departments across the eighteen local government of the state.

The chairman of the network , chief Alex Ajipe , who was represented by Mr Folajimi Dabo, informed the forum that the organizer of the competition is soliciting their support as head of departments in their various local government to host a successful tournament .

Ajipe, who made this known during a meeting with the forum of head of departments in Ondo west local government secretariat, added that the aim of organizing the competition is to reawakening the hitherto moribund Ondo state Governor’s Cup .

“We are also using the opportunity to follow up the earlier letter sent to each local government to get feed back .”

The chairman of the forum ,Mr Layo Babade from Owo local government appreciated the organizers for the recognition done on them , saying the message will be disseminated across to the head of sports unit in all the eighteen local government of the state .

He added that all what will be required to organise the preliminary stage of the competition at the local government will be forwarded to the organizers.

Some of the HOD’s who spoke during the meeting said they have not received any letter in that regard ,while those who confirmed the receipt of the letter , said no preparation is on ground, due to lack of fund.

They added that the date of registration for the preliminary stage at the local government has lapsed yesterday .

Earlier Ajipe has informed the forum that the registration date has been extended to Friday 19th October, saying the preliminary will kick off Tuesday 23rd October.

He therefore enjoined the forum to forward their request to them timesciously.