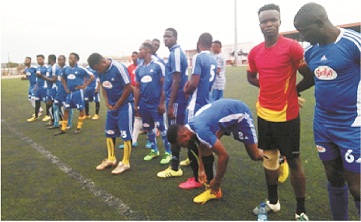 By Femi Atoagbe
|
The preliminary stage of the much awaited Governor’s Cup tagged (Aketi Cup )kicks off in Akure South Local government , in the state capital with two different matches decided at the Ondo State Sports complex .

The first half of the game ended 1 -0 in favour of Remdel FC with brilliant team work from Remdel FC before Victor Ojo tapped in the goal over the opposing goalkeeper to put his side ahead .

The second 45 minutes produced a good result for Signature FC with a thunderous outside shot from Tosin in the 59th minute while Frank made it two for his side in the 85th minute.

While the second match between Shoprite FC and Super Stars FC ended in a 1 -0 win to the advantage of Super Stars, Shoprite FC got two red cards in the game when their goal keeper and a defender displayed acts of indiscipline as they were red carded by the center referee in the 50th and 78th minutes with rough tackles.

Earlier, the Chairman and CEO of (Klick konnect Network) the main organisers of the competition in conjunction with the Ministry of Youth Development and Sports. Chief Alex Ajipe , who was represented by Mr Folajimi Dabomi during the kick off , charged the local government football Councils and the referees to stand as unbiased entity by throwing the match open for the best team to emerge.

Ajipe added that they should be fair to all the participating teams, adding that they should adhere strictly to the rules of the tournament by making sure players that will be competing are not league players

According to him, “the purpose of this competition is to re-awake the moribund Governor’s Cup and to produce raw talents from the grassroots, we want to breed and nurture new generation of young stars that will do the state and the country proud in future .

We observed that talents abound in every nook and cranny of the State , we don’t want them to waste any longer ,we don’t want to wait till we read or watch them on the screen and pages of newspapers that ,that boy is from our State.”

“We want to catch them young.”

Signature’s Coach , Mr Okelola Segun during an interview with the Sporting Hope after his team emerged the winner of the first match, said he was elated that his team came from behind to win the game with 2-1 .

During the pep talk, he motivated his boys by telling them they could do it , saying he made some adjustments where needed ,when they went back for the second half they showed some characters by playing according to instructions given to them and it resulted in two beautiful goals.

“We wish to win to qualify and go ahead and win the main tournament ,but we are going to take one match after the order, we don’t want to be distracted, our target is how to win the next game,” he said .