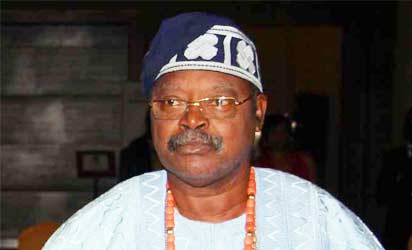 By Sade Adewale
|
The Director General, Center for Research Information Management and Media, Dr Raphael James, has debunked the purported news of the death of Nigeria’s one-time Minister of Information, Chief Alexander Akinyele.

Contrary to the news which broke out on Saturday and gripped the people of Ondo community, James ,  a close associate, told The Hope Metro, in a telephone interview,  that Chief Akinyele, is hale and hearty.

He confirmed that Chief Akinyele, who is the Lobosun of Ondo Kingdom,  personally  called him this morning on phone to help him debunk the rumour and inform the public that he is alive, as at this morning and in his house.

The director who disclosed that he had  posted some write ups on his social media page to contradict the negative news, said, “On November 2, 2018, the media took a new turn with stories from Doyinsola Ogunbiyi, in her social media page, Yemi Akinunde in his post on Facebook and Folu Olamiti of the Tribune, who did a tribute on Chief Sir Alex Akinyele, announcing his obituary.

” I got a total of 41 calls asking if the story was real, and I also received a call from the Public Relations Guru himself, Chief Alex Akinyele who called me to debunk the story.

“This is a repeat of what happened on same date, November 2, 1989, when the Nigerian Tribune on its front page had its headline: “IS ZIK DEAD” the next day the Nigerian Television Authority (NTA) during the nine clock news after a short documentary on Zik, ended it with “May his soul rest in peace” and it was followed by a condolence message by Chief K O Mbadiwe and the Committee for the Transition of Nnamdi Azikiwe. It was most embarrassing even to Zik who listened to the news right there in his sitting room with his family.

“This is the same way Chief Alex Akinyele was feeling when he called me again this morning and asked me to assure his friends, fans and family members that His Creator is good to him and he is thanking Him always for good life.

” I pleaded with him to let someone take him a photo and send to me on whatsapp. And this is Chief (Dr) Alexander Opeyemi Akinyele, JP, as at this morning November 4th 2018. “He is very much alive and may God grant him long life and good health. He will be making an official statement before the end of the new week,” he stressed.