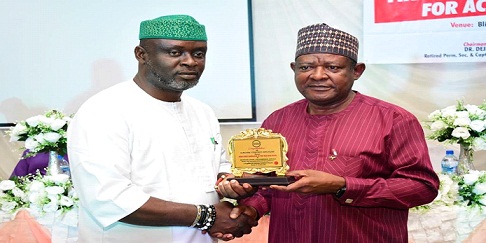 From left: Chairman, Ondo State House of Assembly Committee on lnformation, Youth and Sports Development, Akogun Olugbenga Omole, receiving the Award, from a retired Permanent Secretary in the State, Dr Deji Akinwalere at the event

He was honoured alongside six other personalities at the occasion.

Speaking on how Omole emerged as the Legislator of the Year, Oludaisi Adetarami, publisher of Sunshine Standard said the process was entirely based on thorough assessment of Members of the House in the context of their deliverables so far in terms of dividends of democracy.

According to him,”long before Akogun Omole Olugbenga was elected as a lawmaker in the present 9th Assembly of ODHA, and since his election over three years ago, he has proven that, service to his people is the centre of his life.

“He particularly has done and still continues to do everything that would broaden the horizon of the youths in his constituency, and of course doing many other things that matter so profoundly to his people.His achievements in these regards are too compelling for any misgivings”.

It would be recalled that Akogun Olugbenga Omole also won the Legislator of the Year in Ondo State Award in 2019 by Chronicles Magazine.

While responding on behalf of other awardees at the event, Akogun Omole thanked Sunshine Standard Magazine and reiterating his unwavering commitment to promoting the interest of his people at all times.

“More than ever before, this honour will further spur me on in doing my best for my people. I equally believe that other awardees being honoured today will further be encouraged to continue to give their best in service to humanity”,he stated.