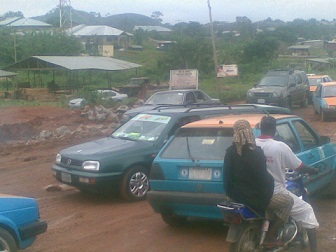 By Adekola Afolabi
|
Ondo State government has begun a remedial work on the Akure portions of the  Akure-Ikere-Ado road.

No fewer than 24 bad locations were identified within Akure axis of the road and the contractor has started work on the failed locations.

Inspecting the road yesterday, the Ondo state governor Arakunrin Oluwarotimi Akeredolu said though enough pressure has been put on Federal government to construct the failed road, his government and that of Ekiti state have decided to  provide temporary measure to address the failed portions of the road pending the time the federal government would provide the permanent solution.

The Akure-Ikere Ado road has become a death trap for road users in the recent times following its deplorable state while Kidnappers and armed robbers have taken advantage of the situation to unleash terror on innocent road users.

Akeredolu said he and his Ekiti State counterpart, governor Kayode Fayemi, had also approached African Development Bank for assistance to alleviate the suffering of the people plying the ever-busy federal government road.

He appealed to the people to be patient as government was determined to address the challenges being faced on the road.

Earlier, the Special Adviser to the governor on Works and Infrastructure, Raimi Aminu, explained that the Ondo State portions of the road covered about 19 kilometres, adding that two of the 24 identified portions have been filled.

He said the contractor moved to site on Wednesday following the directive of the governor to alleviate the difficulty the people are facing on daily basis, adding that government provided the temporary measure pending when the final solution would be provided.

The federal government had designed the road for dual carriage way but the actual time when the construction would start is what the road users are waiting to see.