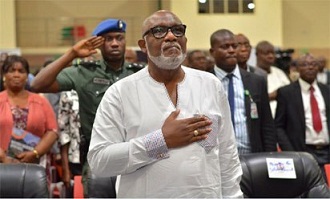 By Adekola Afolabi
|
The Management of Akure Airport has expressed appreciation to the present administration in Ondo State over  its impressive patronage of the airport since assumption of office   by Governor Oluwarotimi Akeredolu in 2017.

Speaking during a courtesy visit to the governor, the Airport Manager, Mrs Joke Olatunji said the Akure Airport has never witnessed the level of activities going on there now since  it  commenced operations in 1986.

She attributed the development to the personal interventions of the governor.

The Manager said through the personal intervention  of the State Governor, Airpeace started the Lagos–Akure Route which has now become a daily flight and the Abuja-Akure Route which used to be occasional with Overland was made stable and equally now coming daily.

Mrs Olatunji also recalled the support given by the governor for the construction of a temporary Terminal and the VIP parking space which she said were the resultant effects of the increase in the patronage of the Airport.

The Manager, however, pleaded with the  Governor to step up his interventions for the Airport which she said is one of the designated Cargo Airports in South-West Nigeria.

Specific areas of need put forward by the Manager include security surveillance and patrol to ward-off all forms of incursions upgrade of VIP Lounge, Lightning the premises of the Airport, office complex and the completion of the main Terminal Building.

In his remarks,  Governor Akeredolu, expressed joy that the efforts at bringing Airpeace to commence Lagos-Akure Route and Overland to increase its flight days to Akure from Abuja have yielded positive results as both routes have now become self-sustaining.

He said the development has positively scaled-up investment inflows into the Sunshine State as several genuine investors prefer Ondo State to others.

Governor Akeredolu said though the requests of the Airport Management are much for the lean resources of the state to accommodate for now, he however assured of assistance.