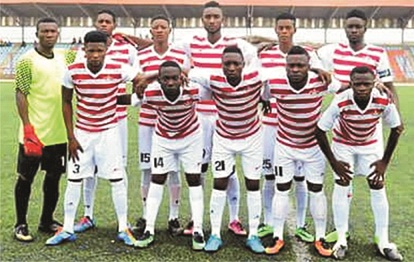 By Femi Atolagbe
|
Ahead of their 2019 FA Cup fixture, Akure City FC thumped Phoenix Athletic FC of Ado-Ekiti by three goals to nil in a friendly encounter.

The match which took the centre stage at the Ondo State Sports Complex saw the Coach Banjo Adepoju-tutored side exerting their authority on the game right from the blast of the referee’s whistle as they took the lead in the opening stages with Jimoh Akadiri scoring the opening goal.

Despite an attempt to fight back, Phoenix FC went behind two goals as Idowu Tosin capitalised on a well worked combination play to register the second goal of the match before Adebayo  Dotun added the third in the second half as AKURE City FC ran out 3-0 winners to keep up their preseason form.

Speaking after the match, Coach Banjo Adepoju lauded Akure City boys for the performance while urging them to do more when they play their first match on Monday.

Chairman of the team Kingsley Ossai said the team is almost set with their preparations this season a situation which means they are on course for another glorious season after their exploits in the F.A Cup and the Nationwide league one last season.

Next up for Akure City is another friendly match against Moyero FC Today (Friday) at the Ondo State Sports Complex.