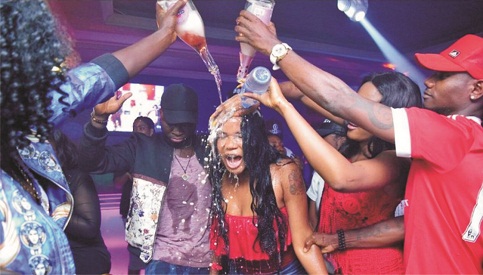 By Tola Gbadamosi
|
Hospitality business is fast changing face these days as Night Clubs are now taking over, providing services that hotels cannot offer.  The Night Clubs are devising ways to change the hospitality industry story.  They liter every nook and cranny of the urban areas.  In Akure, the Ondo State capital, they have registered their presence in places like Alagbaka GRA, Fire Brigade Office area, Oyemekun road, Oba-Ile road among several other places.  In the day time, one could easily pass through the Night Clubs’ locations without noticing such operate there.

At a night club in Akure metropolis located between Cathedral and Champion Junction along Oyemekun road, the building has multiple uses and purposes at different hours of the day.

Between the hour of 8am to 6pm, it is used as regular  business center like any other shops where people engage in normal buying and selling activities.

At the hour of 7 to 10 pm, the open space outside the building is the first chamber with chairs and tables  arranged  in front of the locked up shops, for night crawlers to enjoy  the fresh breeze alongside assorted alcoholic beverages, asun,  suya,  pepper soup being sold at moderate prices.

The second chamber of the Night Club is the regular night club that starts at 10pm. As I walked along the corridor to the chamber, I noticed groups of people on both sides busy smooching and  curdling each other at dark corners, then I knew I was in for an eventful night.

Personally, I could see the place filled with ‘exhibitionists’, people who came to explore, who could simply be described as sex maniacs or ‘sex- ploitators’ if there is any English like that.

It is mind-blowing to observe that in this night club, the customers were all between the ages of 18 and 26 years of age. Teenagers occupy the largest number.  “Yahoo boys” as they are commonly called were not left behind enjoying themselves in the club.

I consider the club  environment to be safe enough,  I could feel no sense of danger as I saw security guards patrolling in and around the club,  and I also saw four bouncers as I walked in. Two were standing at the entrance while the other two were moving in the midst of everyone keeping the crowd calm and safe. The most amazing thing was that the atmosphere appeared the safest place  and at the same time deadliest place to be.

The music blaring everywhere and the dance steps were same as the type in vogue. Most faces I saw in the club were young and tender, it breaks my heart, and I asked myself what is left of our tomorrow as a nation.

The population at the club as at the time of my visit between 10pm and 3am stood at about 150 persons although there were movements in and out continually.  There were about 15 young girls who came to render ‘service’ with additional three waitresses who were seen in uniform.

Taking a look at the smoky club with the loomy disco light, I could see eight Ciders with four pipes. Each on a table as the boys and girls with huge smoke bellowing out of their mouths and noses enjoying themselves.

Our correspondent, after pretending to be one of the ‘customers’ at the club met a lady who assured her of helping her out in getting good male partners for business.  She said “if you no mind, we fit help you arrange for one but you go settle us after o.

This particular girl by my side was doing nothing else but having a nice time smoking the Cider from the pipe as more smoke filled the venue. I had no choice but to make her a friend. My newly found friend whose name is withheld seems a nice girl, a 200 level student of a university in Ondo State.

Curiously, I asked her  how much it cost to get one cider on my table and I was told  N3000.

I also  noticed that the building has some rooms down floor,  since it is an ancient design with wooden staircase. The girls were seen taking  men into the rooms and coming out. I asked how much it cost and she said it’s for N500.

The rooms for ‘short time’ or ‘short rest’ are in high demand.  As I was told by my ‘friend,’ the bartenders are in charge of the rooms.  Several of the male customers seeking to ‘relax’ with their female ‘friends’ awaited their turns to use one of the rooms for 30 minutes.

In the process of such waits, the drama that ensues can best be imagined.  For example, our correspondent observed that some of the male customers eager to go in quickly gave the bartenders in charge of the rooms tips to jump the ‘queue’.  And soon after receiving the tips, the bartenders signal to such customers and their partners to go through another entrance.

While  anyone can afford  a decent bottle of beer in a regular beer parlour or bar,  this club targets a much richer and luxurious clientele. The drinks in this nightclub sell ten times higher than their regular prices.

Arrival of the casket

Just as the DJ was making his rhythms, suddenly all light went off. In few seconds, another bright light appeared moving towards the table next to mine.

I noticed most of these clubbers don’t drink these drinks in the casket. Some opened and used it to wash hands and legs as others watched.

These set of people  are called the big boys and they call it “balling.”

Some set of guys came in and went straight into a tinted glass cubicle, I kept wondering what was happening. As the music was blasting very loud I asked who they were. She said  “those boys are  the bigger boys o. In that place any thing can happen.”

Out of curiosity,  I told her we should go there, she replied, “I don’t want them to chuck prik for my yansh”  as we both laughed. She picked up her rap of Igbo and gave a heavy dope. As I looked towards the entrance of the cubicle, I saw a girl coming out  with  her belt down as she was adjusting her jeans leaving the rest to imagination.

My newly  found friend said: “you see those girls, them don catch that big fish this night.” I asked her if she was not out for catching. She said she was off duty.

Arrival of the Strippers

It was about  2:15 am, suddenly  all lights  went off and came  back under  three minutes  as a stage light with stack naked  girls appeared as they dance to the music.

The view was extra ordinarily and unbelievable as everyone  in the club  started screaming and danced as if they have been waiting for them. I was also amazed how these  girls were dressed in a black leader boot, a leader dog chain on their necks as they danced freely, shaking every part of their bodies.

This took the tempo of the clubbers higher even the big boys from  the third Chamber  came out to join the full house. I noticed  one thing, they  all had Igbo raps in their hands and drink on the other  as they danced and sang I could see that they had lost their mind as a result of what they were consuming.

After a while, one of them started throwing money at the girls  as others joined. I was informed that the girls only  come to dance nude once in a month, that is every last Friday of the month.

These three  beautiful young girls with  different shapes and sizes wore lingerie in different styles, thoughtfully and danced to the beat which  makes the men long for them.

I then asked my new friend at the club if the men could touch the girls. She said it was not allowed for any one to touch  or snap the girls. “As the girls are,  nobody is allowed to touch them on stage.”

At the other side of my table, there was another set of boys. The youngest could not be more that 18 years. He came out and started spraying money as the naked girls were dancing.

All these were going on while my new friend who said she was an undergraduate in one of the varsities  and her other female partners  were busy taking so much delight in  smoking their Igbo steadily. The raps I counted  with  her was six. And she was  ready to go for more.

You could see how stoned these young  girls were as they drew out another rap of Igbo including my newly found friend. I could sense she was no more in the mood and I quietly stepped out at about 3:30 am.