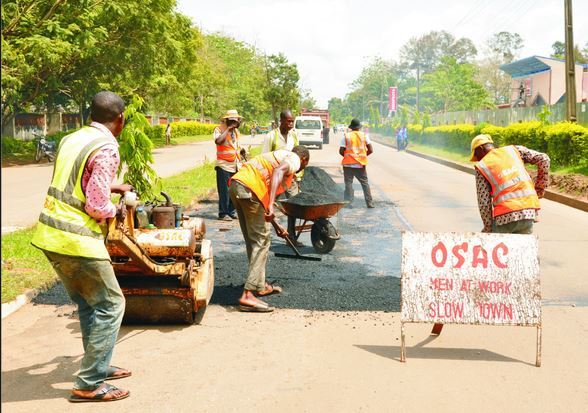 Worried by the pains motorists go through as a result of failed portions on the Akure-Owo Express way, Ondo State government has commenced rehabilitation work on the failed portions that have left many motorists with tales of woes due to its deplorable state.

Governor Oluwarotimi Akeredolu while speaking with newsmen during an inspection tour of rehabilitation work on the road, said his administration had made several efforts to get the Federal Road Maintainance Agency (FERMA) to fix the failed portions of the federal road.

He said FERMA’s response was that the repair work on the bad portions would not commence until after eight weeks.

“The last we heard from them was that it was going to be impossible until about eight weeks time and the commuters were having a hell of time here.

“It is clear that the Federal Government has stated to us that if we get the road fixed, we may not be reimbursed, but we are concerned about those who ply the road, who are not only Ondo State people, but everyone as it serves as the link to the northern and eastern parts of the country.

“To end the hardship motorists and commuters plying the route are subjected to, we decided to mobilise our Direct Labour Unit of the Ministry of Works to rehabilitate the bad portions within two weeks and succour the the users”, he explained.

Earlier, Director in charge of Direct Labour in the state Ministry of Works and Infrastructure, Engr Stephen Akinbode said two failed portions were identified on the ever-busy highway from the Owode end after the Akure Airport to Eleyowo area.

Akinbode who explained that after clearing the existing block drains on the road, they will scarify and then put stone base before asphalting it, assured that the work will be completed within the stipulated time.

Some motorists who spoke with The Hope commended the Akeredolu-led administration for not abandoning the road which is the Federal Government’s property.

They applauded Governor Akeredolu’s noble gesture to rehabilitate the failed portions including that of the Owo-Ikare road, describing it as a move that would mitigate the hardship motorists had suffered on the highway.