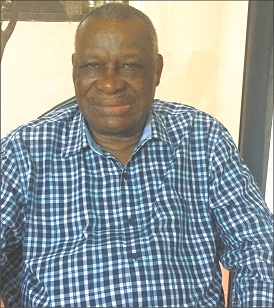 Wing Commander, Ita Ikpeme was the first Governor of Ondo State. He spoke with SINA OGUNJOBI at his Ogudu GRA home.

I am delighted because anybody or agency that attains the age of forty three is no longer a kid but an adult. It should be in the position to take care of itself and do things that are reasonable, good and profitable to the citizens of that state. It was not easy 43 years ago. I was a young man then, to be precise; I was 41 years old because I would be 84 in April. Most of the things I did then I can no longer do now. You know that when young one gets to a place you see them full of energy.

One thing is certain; you have to take decisions in anything that you do. They are very important and that you must do and be in a position to defend whichever decision that you take. You must be quick about it too. God gave me that ability to do such by the time I was the Governor of Ondo state.

Were you aware that you would be appointed as Governor of the state?

I did not even know why they made me the Governor in the first instance. I did not join the Air force as a cadet. I was an engineer at the P and T. In fact, I joined the organisaton in 1955. I left secondary school in 1953 and got a job as a clerk at the Audit department. At that time, when you finish school certificate and looking for job, in fact the colonial masters made it such that you have to take an examination in which they call civil service examination. They categorized us into two, Grade one and Grade two. Grade one for those who offered science subjects and would eventually become Engineers. The second grade was for the administrators. For such an examination if you passed it and you have a job, you are sure to be confirmed.

I was in Lagos after my examination to spend some time with my father when a notice inviting me to write an examination came. My father sent me a telegram informing me that my examination centre had been fixed for Portharcourt. I went back home to prepare for the exams. Thereafter I went to live with my aunty who worked in Kaduna. She had already made arrangement for me to start job as a clerk. So I started waiting for the result of the exams. So the result came out and of course passed.  Then I was asked where I would work, either Ministry of Communication or Works. That was how I got to P and T. we were sent to Oshodi for a three year course.  After the course, some of us that passed well, 15 of us were shortlisted for further studies at Yaba Technical School together with those from the NBC.

In 1958, Nigeria’s independence was near and some of the white Engineers were about to live. They then encouraged Nigeria engineers to study abroad so as to be able to take over from them. I did not have any idea then that I was going abroad. My father then could not afford it. When I came back I was then posted to P@T station in Iponri. I went to the Air force headquarters in Lagos to see a friend. There I met a senior officer who later became the chief of Air staff, Major Isa Adoko. I was introduced to him as an engineer. He said the Airforce was looking for engineers because Civil war was on.

Three weeks later I was invited for an interview and was offered the job and ordered to report to Kaduna to start eight weeks military training. So that was how I joined the Air force.

When the announcement got to you that you had been made Governor of a new state, how did you receive it?

Let me give you an insight into the whole thing. I was the second engineer employed into the Air force and my area was communication and electronics. I was working directly with the man who later became the Chief of Air staff, Isa Adoko and we were working on the Makurdi run way lighting system, including the consultant of the project. I was a go between them. The job was his project. He was very interested in it and I was coordinating. So one morning, I did not go to the office directly, my office then was at Onikan. When I came back, my immediate boss, Bala Usman said that ‘the Chief had called” and that I should come to the head quarters. The invitation looked abnormal because before then I would return the call before going to see him. So I was worried and thus told my immediate boss that there must be a problem.

I therefore went to him at the Defense headquarters. When I got there he was having meeting with some senior officers. Before that time, whenever I met them in such meeting he would ask me to join them and participate in the discussion. On that day, he asked me to wait outside. Some of my colleagues at the meeting asked me to be prepared because there may be some issue having been told earlier not to attend the meeting.

When they all left, he asked me to come in. as soon as I entered he stood up, I saluted normally, you know the normal protocol, he shook my hands and said congratulations. I was waiting for my promotion so I thought that was why he congratulated me. I said thank you sir; this shoulder needs to be changed. He said no, then I asked what was it then sir. He took me to the map and said we have decided to make you one of our Governors. He pointed to a portion in the Nigeria map and said that “we are creating a new state here which we will call Ondo State. You will be governor of the state. I was dazed, a direct short service officer is not entitled to such a privilege. I could not say anything again. He said okay you will be briefed on Saturday at the Supreme headquarters. The Chief of Staff will brief you, that person was Obasanjo. He said but keep it confidential.

I left; in fact I could not tell anybody I just went to my office. So Bala having seen my mood asked what was wrong. I now said I would tell you what happened but if I heard it anywhere I would know that it came out through you. I narrated what transpired between Chief of Air staff and I to him. He started laughing and congratulated me. I consulted my younger sister. She was Obasanjo’s mate, nursing officer. She promised to speak with Obasanjo.  When she did, Obasanjo said the decision had been made and nothing could change it. Till date I have not been able to know why I was chosen because I did not lobby for it.

How did you feel when you arrived Akure?

We first went to Ibadan. There we were able to discuss. Seidu Balogun, then appointed Governor of Ogun state Col. David Jembewon, our host and I. We were able to discuss how we would move civil servants to the various states. We spent two weeks there sorting out staff issue. We appointed our own Secretary to the Military government, SMG. Iwajomo who was the most senior civil servant from Ondo state was appointed. The one for Oyo was the SMG for the defunct western state. We communicated all these names to Lagos and approval given.

We went to Akure on inspection. We realized there was no accommodation for the governor not to talk of the commissioners and top civil servants. Akure then was just a small provincial town. We finally settled down and started administration but there were challenges…

Cuts in, what were they?

Accommodation for office and personnel. What I did was that the SMG and I sat and decided that Akure cannot accommodate all these civil servants because there were no houses. Akure was fortunate to be equidistance to all major towns in the state and there are some villages then. I therefore advised civil servants to live in the various towns and I provided transportation for them that would take them to office in the morning and take them back in the evening. It was not easy but I thank God that we were able to start with little challenges.

What are the first major things you did when you got to Akure?

We were actually looking for where to settle first. We were looking for how the civil servants could be accommodated. Therefore, furnishing places which were available was paramount. We therefore got to furnish those places. Throughout my stay, I did not award any contract. The briefing I got while coming was to work harmoniously with members of the state executive. I therefore decided that everything should go to the tender. So you your issue through memo and which the majority decided is the final.

We started building the state up with the establishment of Radio Corporation. Ministry of Works was expanding. We started building houses. I also noticed that General Obasanjo was interested in coming to those new states. I called my SMG and said we don’t have any accommodation, no guest houses, how could the man come with all his entourage? Where would they stay? We gave some contracts out for the building of those flats. You know contractors. They think of their profit first before. One morning I informed the SMG that we would build an estate of bungalows and I will be in charge of the project. We will get civil engineers who would be the project manager. I ordered the ministry of Works to move all their equipment to the site. I asked the architect to give me a design, I also asked him to cost it which he did, put 20% profit on the project.

I also asked him to cost the materials. We then advanced the Ministry to procure the materials.  We asked contractor to buy their materials from the ministry. We gave them mobilization fees and they were paid in stages. We had a finance sector. Before then, I had ordered all the contractors in the state to assemble at my office.  At the meeting I informed them that I will give them a bungalow to build each to build and that the ministry of works would supervise them.

Akure almost become a factory because many people were engaged and money circulated within the state. Everything was done within three months. Shortly after Obasanjo said he was coming to the state for inspection and when they arrived they were surprised about the level of developments in Ondo state. He even acknowledged it at the Federal Executive Council.