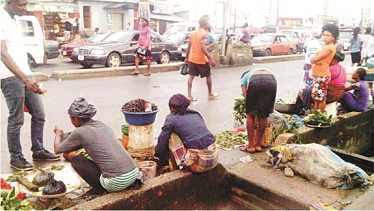 By Bisi Olominu
|
Akure, the capital city of Ondo State is expanding every day. Like most cities in the world, it has its own peculiar problem as more people come to the city to do business on daily basis. With the town population explosion, which stands at 7 million, multiple problems are bound to happen.

Street trading for long has been a major cause of traffic gridlock in Akure and the state government has done everything humanly possible to stem the tide, the problem is yet to abate.

The officials saddled with the responsibility of monitoring activities of traders along Oba Adesida road have hectic time controlling the deluge of traders converging to trade on this road on daily basis. Within the hours of 8 in the morning to 4 in the afternoon, the officials adequately controlled the traders, but after the working hours, it is actually hectic for motorists to get to their destinations in time.

With the country’s economy nose diving and the inflation rate now 17.5 percent, more people are involving in street trading, drafting their children after school to trade for them. The young turks can be seen trading under the overhead bridge along Oba Adesida road stretching towards Oke Ijebu junction looking for customers’ patronage. Oke Ijebu has become notorious for motorists with transporters converting the junction to their motor park.

Another issue is the road side packing menace by those with cars but won’t use the parking lot established by government at the back of Akure Central Mosque. The car owners preferred to use the road side, park indiscriminately on the road, thereby making other users discomfort. Despite efforts made by the state government to sanitize the problem, many motorists still ran foul of the law on daily basis.

There is, however, a divergence of opinions on what should be the response of the state government to street trading, in particular.

Some are of the view that the government should not enforce a ban on street trading on the account that it is an integral part of African custom and tradition.

It is, indeed, difficult to see how a phenomenon that promotes child trafficking, rape, ritual killings,misuse of public open spaces, child labour , insecurity on the highways, environmental degradation and violation of human rights could be allowed to thrive in any sane society.

This distasteful practice is now a common sight across the state with its attendant harsh and depressing implications on commuters and pedestrian movements. Since roads have suddenly become excessively narrow as a result of vehicles that are parked on either side, the safety of commuters and pedestrians become seriously compromised.

Many have lost their lives while jogging or walking along the road. No thanks to roadside parking! Consequently, many who would have loved to engage in walking for pleasure and fitness have to think twice before engaging in such a risky venture.

No matter how much energy that is put into courting foreign and local investments, the enabling environment must, first and foremost, be created before such investment could thrive. Traffic gridlock is, no doubt, bad for business. And roadside parking and street trading are partly responsible for Akure traffic gridlock.The menace of street trading, especially by street hawkers, seriously complicates the traffic situation in the state. Despite the huge resources that the state government has committed into education, street trading partly contributes to low academic performance and outright school drop-out by children in the state. Many children have sustained lifelong injuries through street trading and hawking. Moreover, children who engage in hawking or other forms of hard labour may physically wear away before they actually reach the productive age. Many children had died as a resulting of hawking in traffics through accidents.

With all the environmental menace and insecurity associated with street trading and roadside parking, it is quite obvious that it could birth other social and security problems.

But speaking on the issue, Mr. Theophilous Agada was of the opinion that street trading cannot be eradicated. According to him, whatever the government is saying about the economy of the country, it is glaring to all that the economy is not favourable to all.

He added that the closure of the border had compounded the problem of Nigerians as many are finding it so difficult to feed their family.

Hear him: ” Whatever evil identifies with street trading, until government at all levels do the rightful thing, people will continue to engage their children in street trading. I have my own little shed and I pay to the government on that little space. A father that has children to feed, graduate brothers being jobless and government not doing anything to absolve them into civil service, what do you expect such man to do since he could not afford money for big shop or market in Akure?

” Poor man is having it rough in this country and it is our government that can find lasting solution to this. I cannot steal and the only thing I know best is to trade. I am totally against those who displayed their goods on the roadside. Government should clamp down on this people always. They constitute public nuisance and government should continue to sensitize them on the danger of staying on the main road to trade.”

Speaking on road side parking, he commended the state government for sanitizing the menace of traders along the main road, calling on the government to sustain the ongoing trend along Oba Adesida road in Akure.

Agada called on motorists in the capital to join hands with the government by parking in designated areas and stop parking indiscriminately on the road along Oba’s market.

In her contribution to the issue, Mrs Judith Obi is of the opinion that street trading can’t be eradicated, stressing that people will continue to ply their trades but warned that children should be allowed to go to school instead of using them to trade.

”My brother there is nothing we can do to stop street trading. The advantages surpass the disadvantages. Since the country economy is going through a turbulent period, people must survive and the only way is to argument what we are doing with street trading.

”Not all of us can have money to rent a shop, shop is exorbitant in Akure, so the only available option is to engage in street trading at designated areas. If the state government can help us to erect shops that can be affordable, we will be off the street in the capital”.

To Mrs Yemi Adeola, she said that street trading occurs as a result of the poverty in the land. She said further that though it has disadvantages but the advantages are numerous.

”What I make everyday on street trading is much more than what those in shops make in Akure. Since the Oba’s market is along the road and many throng the place everyday, it attracts people and those coming and going to their working place every morning peep in to buy goods from us. Street trading is lucrative, despite standing in the rain and sunshine for many hours, the money we make on daily basis is enough for us.”

To Mr. Sunday Mba, street trading has come to stay since the economy of Nigeria is not good to the downtrodden. If the economy is good, people will rent a shop and stop staying inside hot sun everyday for a living.

” Do government or anyone just think it is good to be engaging in street trading? Government should do the needful by making live meaningful for Nigerians.’’