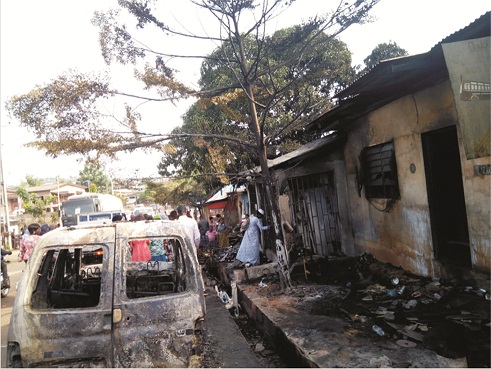 It is the wish of virtually everybody as he wakes up each morning to go out and get back home safely and never to witness any calamity. It was not a pleasant evening last Wednesday for some residents of Shagari village and some road users of the Ilesa-Akure highway as a diesel tanker fell off on the road and exploded.

The incident which according to eye witness happened around 7pm thus preventing people from accessing the road but for the timely intervention of the officials of the Federal Road Safety Corps and Ondo State Fire Service among others who were on ground to restore normalcy to the area.

Saying the incidence wretched havoc in the area is not far from the truth as lives and properties including four cars and a bus were lost.

While some have become homeless, others have began to count their business losses as some shops were not spared from the fire outbreak.

One of the victims who was about to speak with Weekend Digest could not help it but fainted before she could be resuscitated by sympathisers at the scene.

As at yesterday morning, Weekend Digest gathered that it was difficult for people go to their various destinations as there were few intra public transport on the route.

Speaking with Weekend Digest, one of the victims, Mrs Olanrewaju Victoria who lost her house to the incidence said; “after returning from work, I was working at the backyard when I suddenly heard someone shouting ‘fire fire’.

“Immediately, I carried my children and ran for safety.”

She called on government and others to come to her rescue as she is left with nothing.

Another victim and shop owner, Mrs. Sola Abiala while lamenting the extent of the incidence called on everyone to assist her saying, “my husband is a civil servant in Ekiti State and he has not been paid his salary since February.

” We use the gain from sales from our shop for our up-keep and most of the goods burnt were on credit facility. In fact, I just stocked my shop yesterday (Wednesday).”

The Deputy Governor of Ondo State, Hon. Agboola Ajayi, on Wednesday evening visited the scene of the fuel truck explosion at Onyerugbulem junction along Akure/Ilesha express road in Akure, the Ondo State Capital.

Ajayi, accompanied by the Chief of Staff to the Governor, Chief Olugbenga Ale and the State Commissioner for Works, Rt.Hon. Taofiq Abdulsalam, described the incident as sad and unfortunate.

He commended the emergency responders for their quick response, which according to him prevented the truck loaded with 33,000 litres of diesel from causing more havoc in the area.