Alaani clocks  four on the throne 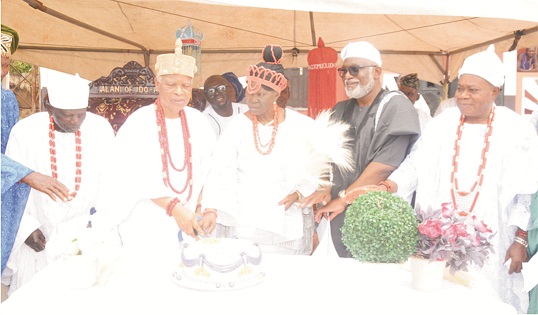 By Kehinde Adejumo
|
The Alaani of Idoani, Oba Olufemi Olutoye marked his 4th coronation anniversary on the throne with a thanksgiving service at Cathedral Church of Holy Trinity, Idoani in Ose Local Government last week.

It will be recalled that the ancient throne of the Alaani has been vacant for close to four years before Major General Olufemi Olutoye (rtd) was crowned the monarch in October, 2014.

At the event, the Ondo State Governor, Arakunrin Oluwarotimi Akeredolu, SAN, thanked God for preserving the life of the monarch, whom he described as a father to him and assured him that the needs of the town and its environs will be looked into.

He commended the monarch for his service to the nation which has contributed to the unity being enjoyed in the country till date.

The Governor assured the people of Idoani and its environs that Oba-Idoani road will be captured in the next year budget for total rehabilitation.

Speaking at the event, Oba (Dr.) Olutoye thanked the Governor for finding time to be part of the celebration. He said the occasion was intended to give thanks and praises to God whose protection and preservation have continued to envelope him and his entire subjects.

Asiwaju Idoani, Otunba Dele Olapeju, thanked the Akeredolu-led administration for making Oba Olutoye’s reign possible and plausible, adding that his reign, has no doubt been a blessing to the community. He commended the governor for his commitment towards the development and growth of the state through the springing up of industries and construction of deplorable roads .

Anglican Bishop of Idoani Diocese, Rt. Rev Ezekiel Dahunsi admonished everyone, especially the elected officials to give thanks to God daily.

“Being alive is by God’s grace and mercy, hence they should not be ingrates, but learn to thank God for been alive.

“It is not because we are the best, but by God’s mercy, you are not the only one that merits that positions, God only used it to bless you, those in elected position should give thanks to God from time to time,” Dahunsi said.

The clergy man admonished leaders everywhere to always endeavour to do what is right..