Albinism and myths surrounding them 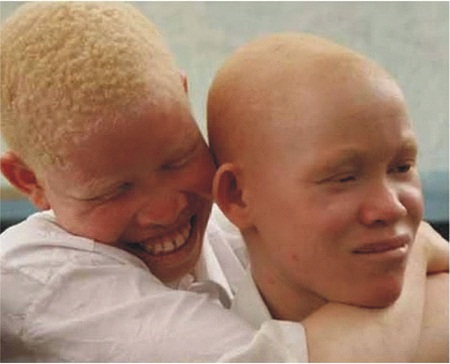 Albinism is a genetic condition caused by a deficit in the production of the pigment called melanin, which protects the skin against ultraviolet light and provides the skin with its colour production. The condition may predispose persons with albinism (PWAs) to lifelong physical and health problems, such as visual impairment and ultra-violet induced skin damage.

It is interesting, however, that the sheer size of albinos in Nigeria has not translated to a better socio-economic welfare package for them over the years but instead, they are being subjected to scorn due to myths that surround their unique nature.

There are actually socio-cultural beliefs about them to the extent that some societies believe albinos have spiritual connections. The Yoruba, for instance, refer to them as “eni orisa”, or associate of the gods. Many indeed are convinced that “afin” (albino) could be used for money rituals. Other myths about albinism are; they don’t taste salt, don’t see in the afternoon, less intelligent children given birth to through afternoon sex or menstrual sex, have body odour, are better at sex among others.

This writer spoke with some albinos to unravel the myths associated with their being, understand their unique world and the harsh encounters they cope with on a daily basis.

Ali Omolehin,  an albino who disclosed that it is not easy to cope with others who are dark-skinned however said that he is overcoming the challenges gradually. He said that living with albinism and surviving in Nigeria is a real struggle.

He said: “Many persons with albinism in Nigeria are struggling with double tragedy. Aside the peculiarity of our nature, our safety is not guaranteed because some people erroneously believe that albinism is effective for money rituals. Another challenge is that we contend  tough times to get and keep jobs because of the misconceptions of employers about our health status.”

He, however, noted that while these misconceptions are mostly out of ignorance about albinism, it has been a major barrier to good job opportunities for persons living with the condition.

“This is because, at the end of the day, it doesn’t always end well. The story always changes. Even if you meet someone that truly loves you, once they take you to their parents, that is the end of it. The person will be like,’ eh no, I don’t want to have an albino,’ not knowing that none of my parents are albinos but they gave birth to albinos. People are just ignorant,” he said.

A trader, who simply wanted to be addressed as Iya Yinka, also explained that she has experienced a lot of discriminations but have no choice than to cope.

She said: “Most times, people refer to me as “afin ti kogbodo jeyo” meaning that albino who is forbidden from consuming salt. I will just shake my head and laugh. Not that I am happy but I must pretend to be in order to have customers.”

Asked if she did not consume salt and how true is the saying that albinos don’t see during the day. She said: “ I take salt like any other human beings but I don’t like my food to be too salty due to the health implications. The general misconception that albinos don’t see during the day is not true. As you can see that I am in my shop now arranging my goods in preparation for customers without anyone assisting me. I come daily to the market from my house and return home when I am through. Can someone who is blind do that?”

Asked to share her most painful and unforgettable experience as an albino, she said that the only thing she could never forget was how difficult it was for her to get married: “I got married to my late husband as the third wife when I was almost approaching menopause. It was a source of worry to my parents when no man was coming for me. The two previous relationships I had did not work out because I am an albino. It was as if I was forced on the man whom I had my two children for.

“My consolation is that none of my children is an albino because as an albino, one live in fear daily. There is a mistaken belief that they bring good luck, wealth, and even political success. Some believe that an albino’s body can be used to harness powers to win elections, a sport competition, to enhance the physical strength of a human or even to cure HIV or AIDS. These misconceptions open our lives to danger,” she said.

A father of three, Mr Anthony who disclosed that albinism affected his sight mostly in the afternoon, shared his driving experience. “When I bought my first car in 2011, It was a dream come true. Fascinated by the opportunity to drive, despite living with albinism, Anthony said he applied for and was issued a driver’s licence. But within one year of sitting behind the wheel, I began to treat severe migraine.

Unsure of the cause of my incessant headaches in spite of the use of recommended sunshades, my wife suggested that I seek medical attention. After placing me on medication for months without improvement, the doctor advised that I forget driving which I did. It was surprising that not up to two weeks that I stopped driving, the headache disappeared. Since then, I have given the car key to my wife who is not an albino.”

On some of the challenges facing albinism, he said: “Persons with albinism globally face discrimination and stigma. While growing up, people treated me as a less human being. People with albinism suffer socially as a result of misconceptions, behaviours, social isolation, labelling, and beliefs that are negatively correlated with their disorder. We face these problems as a result of public misunderstanding about albinism.

In the word of another albino who is an artisan, Mr Oluwole Ajakaiye, the myths that albinos don’t see clearly in the afternoon and are forbidden from consuming salt are not true.

He said: “ I see clearly in the afternoon like night and I also consume salt moderately. The only challenge my nature poses to me is the sun. The effects of the sun on albinos’ skin can be very severe that it can cause cancer if care is not taken. That is why people living with albinism always protect themselves from  sunlight. We also use sun cream not only to protect our skin but to also keep it glowing. “

Ajakaiye, who disclosed that he has not experienced any form of stigmatisation like other albinos because he is friendly, added that he is about to wed his heartrob who is not an albino. “My wife to be is not an albino. Though, I thought I would not be accepted by her but she proved me wrong. Her family also gave consent to the union. Very soon, we will get married.”

On if albinos were used for money rituals he said: “I have been hearing that for a long time and I have always been careful of where I go and who I associate with because you cannot trust anyone. My only observation is that the idea of using albinos for money rituals was in the dark old days. Such is not well pronounced in this modern day,” he said.