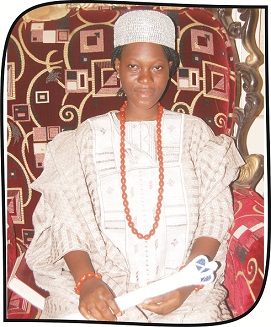 Princess Moyinoluwa Falowo is the daughter of the late Oba Aderosoye Adenibuyan Joseph Falowo, Ogagalasa II, Olubule of Ibule, in Ifelore Local Government Area of Ondo State. The 26-year-old Regent ascended the throne on April 11,2019, but before then prayed fervently like Jesus Christ for the cup to pass over her. As a born again christian, she wrestled against her choice for the stool  as she described the meat as “unclean”. She finally gave in and accepted to serve her community a month ago. In this interview with the Features Editor, BISI OLOMINU, the Regent narrates her journey to the throne, the battles involved and her fear, rituals and custom of the community, her guiding principles, the man in her life, her future vision and other sundry issues. Excerpts.

Tell us about your birth and educational background?

I was born into the family of the late Royal Majesty, HRM, Oba Aderosoye Falowo and Olori Catherine Falowo on June 5, 1994 in Akure. I was born into a polygamous family and I am the only daughter of the second wife. I attended Oyemekun Staff Primary School, Akure and proceeded to Federal Government Girls College, Akure and Ondo State University of Science and Technology, Okitipupa where I obtained BSc in Microbiology and I came top of my class. After my mandatory one year NYSC service, I started work at a Laboratory in Akure before this calling came to become the Regent of Ibulesoro one month ago.

How would you describe the late Kabiyesi?

Late Oba Falowo was a total father who loved his children. He sacrificed all to make sure that his children are educated. As a former Principal of Oyemekun Grammar School, Akure, he was a disciplinarian, caring, loving, a lovely father and a great Oba who was ready to serve his community. He was ready to train his children and he provided to the best of his ability for their comfortability. He was the most neatest man in the world that I have ever seen and very hardworking.

How would you describe his death?

It was a great blow to the family and the entire community. It was a time we all needed him most.

Did you have any inkling of becoming the Regent?

No. I never for one day thought about this. I have two elderly sisters, but they are not in the country. I am the only daughter of my mother at home, that’s the second wife. But when my people called my attention to the regency stool, I prayed fervently about it for several days, until I got the conviction from God to mount the throne and that there won’t be any evil.

In one of your Facebook posts, you said you prayed against been chosen as the Regent. Why?

Why I rejected the throne initially was because of the idolatry associated with it which is totally against my faith. While Kabiyesi was alive I never for one day thought I would become the Regent of Ibulesoro. I have plans for my life and I want to pursue my dreams. In fact, many consider kingship and chiefs to have direct alliances with traditional “idols”. Hence my initial rejection to ascend the throne.

Kabiyesi, is that why in your post you described Regency as ” a meat unclean ” and should not be eaten by me?

That quotation was taken from Act of Apostles, Chapter 10 verse 9 -14 which says, “On the morrow, as they went on their journey, and drew nigh unto the city, Peter went up upon the housetop to pray about the sixth hour”.

“And he became hungry and would have eaten: but while they made ready, he fell into a trance and saw heaven opened and a certain vessel descending upon him, as it had been a great sheet knit to the four corners and let down to the earth. And there came a voice to him, Rise Peter; kill and eat.

“But Peter said, not so, Lord, for I have never eaten anything that is common or unclean.”

I have told you in the course of this interview that I never thought for one day of becoming the Regent, even when my father was alive. I thought in my mind then that even if made one I would reject it because of my Christian background and I don’t have passion for it. With the rituals and tradition associated with the throne, I don’t have any interest in idolatry and if there are some doing it I don’t have any business with them. So the scripture quoted is from God to me to show His supremacy over all things.

God is telling me that what he has made clean should not be called unclean. I fought with this in my heart, but God promised that my reign will be peaceful and that development will come to my domain. If God say this leadership post belong to you, He will surely put you there no matter how you struggle against it. God has made the throne clean, so, I have been eating from there and carrying out my responsibilities as the Regent.

Since you ascended the throne, has your fears been completely taking away?

My fear has been taken away by God. He is the owner of the throne and I now have peace all around me.

You have been an Oba overseeing elderly chiefs and other elders of the community. Have you been able to tap from their wisdom?

Our relationship has been cordial and since ascending the throne they have been of tremendous help to me. They have been advising, counseling and tutoring me on what to do. What they are doing is what I call traditional education. In fact, they have been supportive.

What have been your guiding principle on the throne?

Fear of God is above everything. If you fear God and are hardworking, truthful, every other thing would automatically follow. God is with me to treat my people right and as well respect them because they are older than me. Once you fear God you will not use your office to achieve selfish goal. The fear of God has been helping me on the throne. Never use your throne for personal aggrandisement.

Would you like to stay long on the throne?

I have told the kingmakers that I have a dream and vision of what I want to achieve in the nearest future. I think they will do something on this so that I can live my normal life.

After regency, what next?

I want to pursue my Masters in Biology Science. I want to have a research facility in Biometric Science. This has been my dream for long and I know that God will make me to achieve this.

How was your social life while on campus?

I am not a social freak, I was reserved while in the university. I was free with people and I go for my House Fellowship always. I was the Editor-in-Chief of my department’s magazine. I have no problem with my fellow students or lecturers while in school. I am cool and I have good time on campus

Are you in relationship?

Has the man been coming to pay homage in the palace?

My man has been around all the time. He is homely, jovial and we have been together for a while.

Part of the custom is that after your regency, you will not knell down for anybody again in life?

When we get to the bridge, it will be taken care of. I don’t have to worry about that now. But I know that I must honour whoever I marry and I must honour my elders.

Can you tell us about the origin of Ibulesoro?

The founders of this town came from Ile-Ife. History has it that Amogofi, Aro and Oroorun journeyed from Ile-Ife, the origin of Yoruba race. When they were hunting, they got to a particular place and after hunting, Amogofi complained of tiredness and he sat down, but one of them wandered to the other side of the bush to establish what is now known as Ilara-Mokin.

That place where Amogofi sat down is called Oke Igbe, that is where kings of this town are crown today. Amogofi after resting moved round the town at midnight and saw two others, Oluwoye and Oluwasi who were already settlers there.

When he saw them they all agreed to come together because slave trade was rampart that time. They decided to send to Deji of Akure to send one of his sons to rule over them, and that son became the first Onibule of Ibule. That son sent by the Deji of Akure was Olupoki. So there is a relationship between Ibule and Akure. You can say that the ruling house in this town is a descendant from Akure.

What are your town’s taboos?

It is a taboo to give birth to an Albino in the town. It has a dire consequence for if such a child move near a river called “Oju Oro”, the river will sweep such Albino away or he or she may run berserk in the town. It is an age long taboo and still in existence today. Again, it is a taboo for anybody in this town to engage in money ritual. If any person engages in it, it would not work. Thirdly, no armed robber can enter the town, if he does, such would not go back in peace.