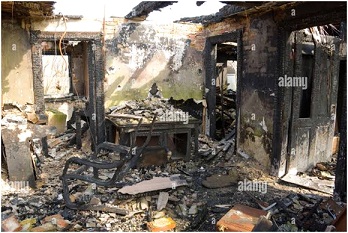 An Odigbo Magistrates’ Court has ordered the remand of a 45-year-old man, Joseph Adeoye over alleged arson.

The defendant was charged with two counts of conspiracy and arson

According to the prosecution, Adeoye committed the offence between September 15 to September 28, 2022, at Alagbado village, Ore, Ondo State

The prosecutor, Inspector Usifo James told the court that the accused and seven others at large conspired to set fire on a building and church properties, valued N10million, properties of one Samuel Alade -Emi

The defendant pleaded not guilty to the offence leveled against him when the charge was read.

Usifo, however, sought for legal advice from the Department of Public Prosecution

The defence counsel, Mr D. I Irene did not oppose the application made by the prosecutor.

The Senior Magistrate, D. O Ogunfuyi in his ruling ordered that the defendant to be remanded at the Okitipupa Correctional Centre pending the outcome of the legal advice

Ogunfuyi thereafter, adjourned the case till December 9 for mention.