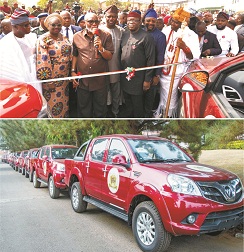 From Akinnodi Francis,  Ore
|
The Chief Imam of Ore, Alhaji Gbolahan Raji on Tuesday, said that the newly inaugurated Southwest security outfit, ‘Amotekun’, would help curb crimes such as armed robbery and kidnapping on the highways.

He told The Hope in an interview that the security outfit would also complement the police and other state security agencies in the southwest in their activities.

The community leader said that community policing like `Amotekun’ is the best arrangement to curb criminal activities in the society.

According to Raji, for the operation to be successful, it must involve partnership, collaboration, transparency and consent with the communities in tracking and arresting criminals.

“I believe Amotekun is a modernised system of collaboration and partnership between the regular security agencies and the community for security purpose within a given area.

“This system is particularly effective in the prevention of crimes, particularly on the highways, where armed robbery and kidnapping usually take place”.

Raji however urged the police to key into the arrangement by providing the system with necessary support so that the outfit could be efficient.

“No policeman will enter the bush in the night to look for criminals because of lack of basic equipment.

“However, the hunters and the indigenes of any given area will understand the terrain and can enter the bush with the assistance of the police.

“So, the introduction of the security system in the South-western states is a good strategy to prevent crime,” he said.

He said that the security outfit was not formed to stop herdsmen from bringing their cattle down to the Southwest for grazing, but to curb criminal activities.

He, however, advised the political class especially in the South West not to politicise the outfit, saying security of lives and property of the people should be priority to all leaders.