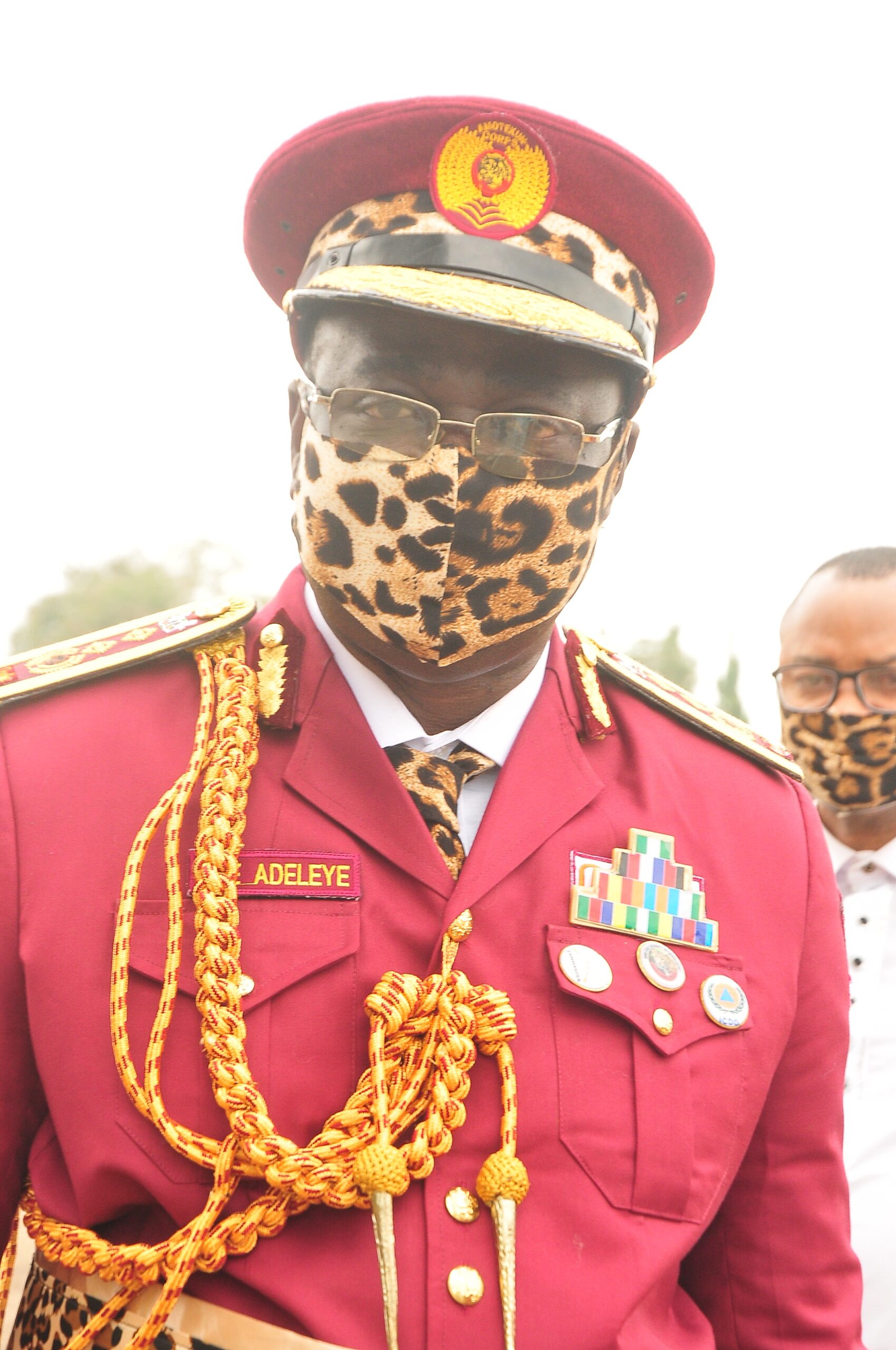 High Chief Adetunji Adeleye is the Corps Commander Amotekun Security Corps, Ondo State Security Network Agency. He retired as the Deputy Commandant of the Nigeria Security and Civil Defence Corps. He was the Chairman of the Committee that transformed the Corps from voluntary group to a full government paramilitary organization. TOLA GBADAMOSI spoke with him. Excerpts:

What differentiates Amotekun Corps from other corps?

Amotekun came because of the insecurity situation in the country generally, especially in the south west.
The Governors of the south west states said it was time to assist the existing security agencies in the country to ensure they secure the lives of the people.
You know how important peace and safety are to the citizenry. Without peace, there is no economic growth and nothing goes on well.
It is in the light of these we came together and brought up this initiative. And Ondo state took the lead by being the first to pass out the Cadets. And the difference is that, it’s a grassroots security outfit.
The idea is that if you look at the conventional security outfits, you have people from all walks of life and different ethnic backgrounds.
But for Amotekun, it is the residents of those particular areas that know the nooks and crannies of the environment. That is why we said zero tolerance to crime. They know who came in newly, and who left last and that’s why we are saying we rely on credible information from the public.
Amotekun as a corps is interested in the movement of the people. These criminals do not come from heaven, they live among us. Because I am from Akoko or from Igbokoda and I live next door to somebody that comes in 2 am everyday without job description, that qualifies that kind of movement, we expect you to let us know.
If we harness all this information, then we will synergise with the existing security architecture and make sure everything is put out to check it.

Does the law covers Amotekun Corps to use weapons like other security agencies?
The law that covers Amotekun said we should use non primitive arminitions. Let’s take for instance, who issue license to hunter to use gun to kill in the bush, statistically it is a thing you buy and register at the nearest police station. However an average Nigerian does not register his gun. But for Amotekun Corps, the law behind it said we bear non prohibitive firearms and that’s what we do.

Without non prohibitive fire arms, how will your men handle a criminal holding sophisticated weapons during an operation?
I was able to lead an operation where over forty cows were taken over by the Fulani’s who were armed. And to the glory of God, I brought all the cows to this office. What we are saying is that the corps is adequately equipped to match them no matter the sophistication of their weapons.

We saw some dogs during the passing out ceremony, are you saying you have section dealing with drugs just like the police?
Yes, we have special trained dogs that go to the forest and if you listened to my speech at the ceremony, I also said His Excellency gave us motor bikes to be able to move to interior villages where cars cannot penetrate. We will use boats to go to the deepest parts of the riverine areas of the state. We have satellite based communication equipment, and we can reach everywhere. All our operatives are adequately equipped to transmit information in minutes.
Amotekun complaint desks will be made available in all local government offices in the state by the end of this month. All complaints will be channelled through that desk and within minutes, they will be acting.

Will there be head for the South West just like the police?
It is just Ondo state Amotekun, every state has its own corps commander. By the law, we can collaborate. The reason is simple. Criminal who stole a car in Ilesa and heading to Benin, all the commanders will be on ground to do what is needed to be done. All we need to do is to give the description of the vehicle to the commanders of the other states.

Since the Ondo state government pays the salaries of personnels of Amotekun in the state, how are we sure it will not be politicised?
You saw the just concluded parties primaries, did you see Ondo state Amotekun carrying paper or chairs around. As an indigene of Ondo state, regardless of your political party, you pay your tax. As a good person to Ondo state you pay your tax to Ondo state. It is still your money the government is using to fund your security.
Amotekun is totally devoid of any political activity. The best that we could do and we will do is to create an enabling ground in terms of adequate security for any political party from any political interest.
After living in Ondo state for a certain period of time you can be employed into Amotekun and we profile you and we see you are not a risk if we put you on board then you are qualified.

What are the requirements to join the state Amotekun Corps?
We earlier said from primary six, but it is expected to the level of a PHD holder. It cuts across age 20 to 70 years.

How will you prevent your men not to compromised in the line of duty?
We have Amotekun culture, and by Amotekun culture it is forbidden, you cannot take gratification. And they know in the course of training, about two percent of the people we took onboard were dismissed even during training, because it is zero tolerant to corruption and zero tolerant to misbehavior. Don’t forget it is a grassroots security outfit. So you can’t even afford to be rude to members of the public.
In dispatching your duties as part of the culture of Amotekun, you must exercise decorum yet be very firm. If anything of such is not imbibed, it is dismissal immediately. Before that, every member of Amotekun has three sureties and guarantors out of which the traditional ruler of where he lives is one of them. We have told these rulers as our traditional leaders that they must attest to the good conduct of whoever they will append their signatures for.
We are not going to relate with the corporate alone, we will announce that a certain person attested by a certain Kabiyesi of a certain town has done something and he is being handed over for prosecution. They know they cannot be compromised.
Our desk officers in our local governments have maximum of three minutes to report any crime to the zonal and the state headquarters.
The idea of sweeping any issue under the carpet does not arise at all. That’s why we have a fantastic and a robust database and communication equipment to take charge.

What is the primary assignment of the Corps?
The Amotekun’s primary assignment is to assist all security agencies in the state to rid the state of criminals. For NDLEA, if you are trading in hard drugs we apprehend you, we hand you over to them. After handing over to the security, we will also monitor the prosecution.
On our own, we are also entitled to prosecute in certain special courts of Ondo state within the jurisdiction of the law. The issue of bribery is not there at all. If anybody is helping you to do your work, would you be angry? We are not rivals but complementary.
Why the police cannot go into the water because they cannot swim, I have an operative who is an Ijaw man that can go into the water and bring me the pirate to hand over to you. I see nothing wrong in it.
To the citizenry of Ondo state, we want to make sure we secure the state and they need to know that security is everybody’s business. We assure you of our confidentiality of the source of our information.
Please avail us quality, thoughtful information about happenings around you. We are available on 08079999989. Give us credible information. We would protect your identity and the source. Once this is guaranteed then you can sleep with your two eyes closed.