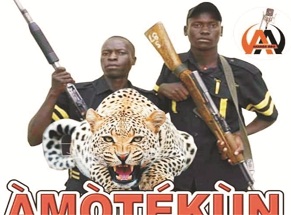 By Victor Akinkuolie, Ado Ekiti.
|
A Pan-Yoruba Social Cultural Organisation, the Defense for Yoruba People’s Rights (DYPR) has taken a swipe on the Miyetti Allah Cattle Rearer over its recent comment on the formation of “Operation Amotekun” by the south west governors.

The DYPR in a release signed by its National President, Otunba Muyideen Olamoyegun, a copy of which was made available to journalists in Ado-Ekiti on Sunday,  said the Southwest region will produce a formidable candidate that will  succeed President Muhammadu Buhari in 2023.

The group ,which replied to the grandstanding of the Miyetti Allah that the zone might lose presidency in 2023 , if it insists on formation of operation Amotekun, said the southwest region is destined for the next presidency, going by the silent principle of rotation.

A herders’ group, Miyetti Allah Kaote Hore, had last week through a letter threatened that the southwest may not be considered for presidency in 2023 taking cognisance of its  insistence on the continuation of the joint security outfit called Operation Amotekun despite the federal government’s pronouncement .

This argument came to the fore sequel to the outlawing of the Operation Amotekun formed by the southwest governors to fight kidnapping and other incidences of banditry within the southwest region.

The Yoruba group affirmed that the southwest governors should have been commended by the federal government on the initiative , rather than proscription they got through the office of the Attorney General and Minister of Justice, Abubakar Malami.

“For Abubakar Malami to have claimed to be speaking on behalf of the Federal Government, we want him to take cognisance of one thing that the law was not made in his office, the constitution of Nigeria is a written one, let him come  and point to at the law which says that hiring of private guard is illegal”

The group who commended the southwest governors, particularly the Ondo state governor over their comments since the pronouncement by the minister, however reiterated the continuous supports of the group over the success of the operation.

The DYPR also warned the Federal Government not to politicise the security operation, explaining that several security outfits was created by governor’s from the Nothern parts of the county and were not declared as illegal.

“Anything that has to do with security does not carry the toga of politics, so it will be a great disservice to our people to politicise the issues surrounding the formation and proscription of Amotekun.

“I salute our governors for breaking the barrier of hardlining politics to form this joint security. We are still at loss with the claim by the federal government that Amotekun was illegal. People were being kidnapped, robbed , killed and traumatised on daily basis and the federal government did nothing. Do they want our governors to watch as their people were being killed?

“They said they won’t give us presidency in 2023 if the governors insist on protecting their people. Well , the position is not being allocated by the group.. Again, let them know that the Yorubas are destined for presidency in 2023, because we have paid our dues as far as the APC is concerned.

“I am a farmer and I knew what it takes to keep your farm. Several millions of farms had been destroyed in Orin Ekiti, Oke Ako and others towns in Ekiti axis, also in Ijare in Ondo and Ibarapa area in Oyo. All these wicked acts must stop and that was what the Amotekun issue was about.

“The leaders of the region and those who were not politicians like Prof Wole Soyinka, Chief Afe Babalola(SAN), Femi Falana, Prof Babajide Akintoye and even our traditional rulers had spoken clearly that Amotekun has come to stay

On the silence maintained by some notable APC leaders in the zone, especially the former Lagos State Governor, Asiwaju Bola Tinubu on the proscription saga, the group said the fact that he has not condemned the federal government openly doesn’t suggest that he was opposed to the highly novel Amotekun initiative.

“He might have his own reason for not speaking out, but I know he will surely support it. Several other people are not talking , but they are tacitly in support of the initiative”, he stated.