Another cycle of election with tears 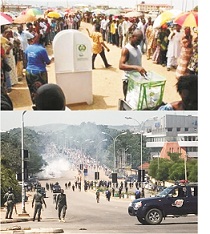 Another cycle of election with tears

By Bayo Fasunwon
|
Public choice in sane societies has been the determinants of the focus, processes and development of societies. However, in many cases the rule by fiat has launched nations into the realms of enviable attainments, when the leader(s) in power were men of vision who supported themselves with a followership of like minds.

Be that as it may, such societies had often realized that the embrace of public choice is sine qua non to a peaceful, egalitarian and progressive society. It is therefore no surprise that nations all over the world have adopted the principles of democracy in their choice of leadership and policies.

Contrary to many opinions, the Nigeria’s democratic experience spans beyond the two decades that pundits wants us to believe. In the pre-colonial indigenous societies in Nigeria, the eastern and western zones of Nigeria had practised a domestic democracy that suited their aims and aspirations.  With colonialism, Nigeria embraced democracy as far back as 1923, after the promulgation of the 1922 elective principle by Sir Clifford. It was democracy that determined the date of Nigeria’s independence, the 1954 and subsequent constitutions that gave directions to governments of the nation until the coup of January 15, 1966. Even within the twenty seven years interregnums created by military incursion into the nation’s politics, vestiges of democratic rule still existed. Given these backgrounds, one would not be wrong to say that democracy in Nigeria is about if not more than a century old.

The perceived youthfulness of the nation’s democracy however is hinged on the fact that the operators of democracy over the years have read from the same old script and had therefore font allowed democracy to grow and develop. In every dispensation of democracy via elections in Nigeria, the political elites have always included in their scripts acts of violence and murders. There seemed to be a creed in Nigeria politics that seemingly admits that ‘without the shedding of blood, there can be no attainment or transition of power’. Therefore from the 1950s till now, arson, assassination, kidnappings, frivolous judgments and election violence have been major actors in Nigeria’s democratic movies.

In the build up to the elections in Kogi and Bayelsa State, the Federal Government in a show of strength assured all voters of their safety and the safety of their votes. Legions of security operatives were mobilized to maintain peace and security in the two states. However, the elections that held on Saturday still witnessed gun attacks, in which some people were wounded and lives were lost. Ballot boxes were still carted away in the full glare of security personnel, while the unfortunate electorate, left to protect themselves, as always had to scamper for safety.

The glorious incidents of violence on Saturday should have been expected when the security laxity of federal agents were exposed at the brazen attack on the entourage of the Governor of Oyo State. The insecurity of the Governor and the security lapses during the elections call to question the efficiency and effectiveness of the nation’s security forces. If they could not withstand the arsenals of bandits and thugs, one wonders how they plan to withstand terrorist attacks or protect innocent hardworking Nigerians in the daily pursuit of living. It is therefore saddening to note that the handicaps of security forces in the 1960s are still in Nigeria’s newspaper headlines in 2019.

It also seems that the people have not learnt from history, and neither have they yielded to the voice of reason in the exercise of their fancies in choosing the best of men to lead them out of obscurity to limelight. The incessant campaigns against vote selling seemed to have fallen on deaf ears as people still sold their birthright for as low as five hundred naira. Some schools of thought could argue that people sell their votes because they knew that their votes may not even count at the end of the day. However, the past elections in the country have shown that this view is not only myopic but untenable. Many elected politicians have lost their elections in court due to the fact that recounts have shown that their votes were manipulated.

Could the deliberate poverty induced by government’s policies be the cause of these sales? On the contrary refusal to sell votes should have been the means of ousting a poverty inducing government and usher in another. From my point of view, people sold their votes because they had lost faith in the electoral system. The Nigeria electorates seemed to have lost faith in their government and concluded, rather unfortunately, that there is no difference amongst the politicians and or political parties. From this pessimistic point of view, selling their votes could be the means of benefitting their personal satisfaction from a person who would only ascend to power to satisfy his personal goals.

With the claims of inefficiency against some INEC staff, the body still needs to do a lot of training and re-training and ensure that competent staff are used in the conduct of elections in Nigeria. It is possible to hold simulation tests for these workers before they get to the field of assignment. It would also be necessary to give more time to their training so as to avoid the fire brigade approach to elections in Nigeria.

Be that as it may, I think the major problem with our electioneering process in Nigeria is the people, rather than INEC and election candidates. The manner in which people yield themselves as instruments of violence and death during elections shows the extent to which they value their lives and those of others. I think most Nigerians are going through psychological traumas that inhibit logical reasoning.

Coincidentally, while elections were going on in Bayelsa and Kogi, and thugs were busy causing mayhem; the duo of Governor John Fayemi and the immediate past governor of Ekiti State, Ayodele Fayose were jovially interacting at the wedding ceremony of the latter’s sons. My heart bled to realize that some thugs had willingly lost their lives for these two men, when they were rivals and ‘enemies’ in the quest for power. Political thugs, since the 1950s have remained sacrificial lambs, whose blood are used to opiate the gods of power.

In order for the nation’s electoral process to have a change of story, there is the urgent need to prosecute and bring to public knowledge, those who were caught in actions that were capable of disturbing the peace of the elections. Furthermore, INEC should set in motion the possibilities of adopting the electronic voting style in the conduct of other elections in Nigeria. This would reduce all forms of voting apathy and also ensure the reduction in vote merchandise. Until that time when the people have a change of mind towards elections in Nigeria, and the nation’s political leadership exercise the political will to ensure free and fair elections, the electioneering process would remain a cycle of violence and terror, for many years to come.