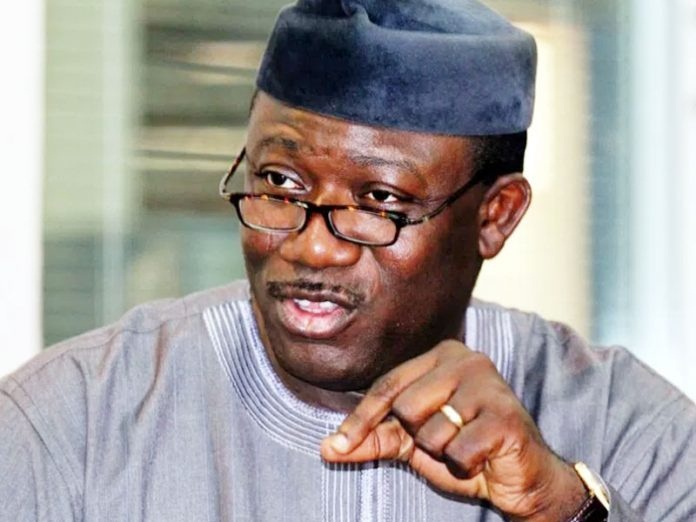 The Governor of Ekiti State, Dr Kayode Fayemi, on Tuesday revalidated his All Progressive Congress (APC) membership card.
He spoke shortly after picking the card at his Isan-Ekiti country home while commencing the Registration/ Revalidation exercise at Ogilolo ward 11 unit 09 .
The Governor who picked the form alongside with his wife Erelu Bisi Fayemi, was accompanied by his deputy, Otunba Bisi Egbeyemi, APC chairman in the state, Mr Paul Omotosho and other political office holders.
The Governor said the APC membership Registration/ Revalidation exercise aimed at getting the data base of members, saying the party would work hard to register itself in the minds of Nigerians.
Fayemi explained that the party at the national level has placed a big task on the shoulders of the party political office holders to ensure that they warm themselves into the hearts of Nigerians through superlative performances at all levels.
The governor clarified that the divergent views espoused by the former Osun State Governor and ex-Caretaker Chairman of the Party, Chief Bisi Akande and the APC National Leader, Asiwaju Bola Ahmed Tinubu doesn’t portray the exercise as unconstitutional and illegal
Fayemi stated that what the two eminent APC members said was to the effect that the exercise should be done in such a way that would bolster its credibility in the eyes of Nigerians.
“I commend the national committee sent to Ekiti for doing a yeoman’s job . I have sent them morale boosting messages . Now, I have registered and everything went well. I have no doubt that the exercise will be a huge success.
“The revalidation and registration exercise is an opportunity for us to get a reliable database about our members and beyond that, we have tried to register APC in the minds of the people.
“APC is a party that has the competence, commitment and compassion for progressive ideals. Our people in Ekiti knew what it used to be in the past years. The formerstate secretary of the People’s Democratic Party, Dr Tope Aluko recently joined our party in Iyin Ekiti and that has been happening all over the state.
“People are coming into APC in droves. This is the party to beat in any future elections, because it has affected our people positively”.
Fayemi appealed to those who wanted to dump the party to have a rethink, saying the APC remains the only progressive party where they can realise their ambitions.
On the condemnation of the exercise by Akande and Tinubu, describing the programme as wasteful and unnecessary, Fayemi clarified that such dissenting views doesn’t abrade the constitutionality of the process.