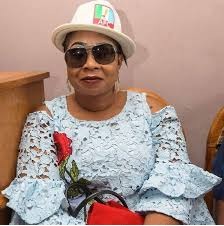 Ondo State Women Leader of the All Progressives Congress, (APC,), Mrs Morenike Witherspoon has debunked her alleged defection from the party.
Mrs Morenike Witherspoon told newsmen in Akure that she has never discussed or told anybody that she would dump his party to join what she described as the already sinking PDP.
She said she does not have such intention.
She, therefore warned those spreading false information aimed at tarnishing her political career to desist, noting that they will never succeed.
“PDP has already failed and Nigerians have rejected them because they have been tested but failed woefully, so how can I leave APC that is working towards strengthening our nation and join the PDP that has sunk already,”She averred.
Mrs Witherspoon, therefore called on the people of the State to join hands with the All Progressives Congress- led government in moving the state to greater heights.