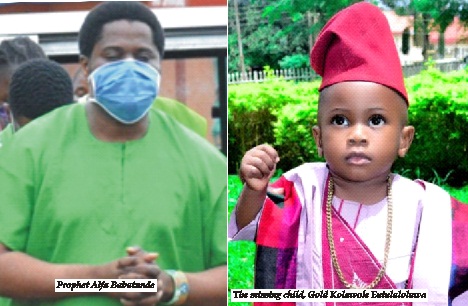 The Court of Appeal sitting in Akure, the Ondo State capital will today deliver judgement on the life imprisonment judgement against Prophet Alfa Babatunde (a.k.a. Sotitobire) by the State High Court following the disappearance of a year old boy, Gold Kolawole in his church.
The appellate Court had in September reserved judgment in the appeal filed by Babatunde, the Founder of Sotitobire Praising Chapel Akure, against his conviction.
A counsel to one of the parties told The Hope that the court had communicated to all parties on the judgment fixed for Friday (today).
Prophet Alfa had in September this year asked the appeal court to nullify his life sentence conviction by the trial Court over the disappearance of the year-old boy from his Church sometimes in 2019.
In his brief to the panel of justices, Counsel to appellant, Chief Adegboyega Awomolo, (SAN) said high points of his appeal were the charges against Alfa Babatunde which were conspiracy and aiding and abetting kidnapping.
He told the court that at Sotitobire Church in a broad day light, a child was declared missing, and that the police were investigating when suddenly the DSS took over the investigation from the police.
He questioned the competence of the Director of States security service to investigate the matter when such was the major responsibility of the Nigeria Police Force.
He said it was based on the investigation of the DSS that the appellant was tried and convicted.
Awomolo argued that his grouse was that DSS did not have the power to take over the investigation from the Police.
Counsel to Prophet Sotitobire said the trial court convicted the appellant on circumstantial evidence and not because of any eyewitness or any confession.
He, therefore canvassed that from the totality of the findings of the trial court, the allegations could not be linked to Prophet Sotitobire on the basis of circumstantial evidence.
He, however urged the court to set aside the judgment of the trial court which convicted the appellant and sentenced him to life imprisonment.
Presenting his own brief, the Attorney General and Commissioner for Justice in the state, Charles Titiloye dismissed the argument that the DSS had no right to investigate and tender evidence in respect of the case.
Tititloye explained that the DSS carried out the investigation because there was a threat to law and order when the issue of missing child broke out.
He hinged his argument on the fact that after the alleged kidnapping there was serious tension inside town, as the church was burnt, many people were killed and property was destroyed.
He said it was based on the crisis that erupted that made the DSS to take over the case, urging the appellate court to uphold the judgment of the High Court.
The presiding Justices after listening to all the arguments of the counsel reserved judgement and said a date would be communicated to all parties.
It will be recalled that the child, Eninlaloluwa Gold Kolawole got missing on November 10, 2019 at the church premises during the Sunday service while the Department of Security Services waded into the issue by arresting the appellants.
Prophets Alfa and six workers in this church were arraigned on two counts bordering on conspiracy to aid and abet kidnapping and aiding and abetting kidnapping. The seventh defendants was later arraigned but was discharged and acquitted during judgment at the high court.
The prosecution was led by the former Attorney General and Commissioner for Justice in the state, Adekola Olawoye, SAN, with other lawyers in his team, while the defense was led by the Remi Olatubora, whose brief was handled by one Olumide Ogidan, Olusola Oke, Akinyemi Omoware and Olalekan Akinrinsola.
In his judgement, the trial judge, Justice Olusegun Odusola found six out of the seven defendants guilty as charged and sentenced them accordingly.
The court sentenced Alfa Babatunde and the five women; Omodara Olayinka, Margaret Oyebola, Grace Ogunjobi, Egunjobi Motunrayo, Esther Kayode to seven years on conspiracy and life imprisonment over aiding and abetting kidnapping. But the seventh defendant was discharged and acquitted.