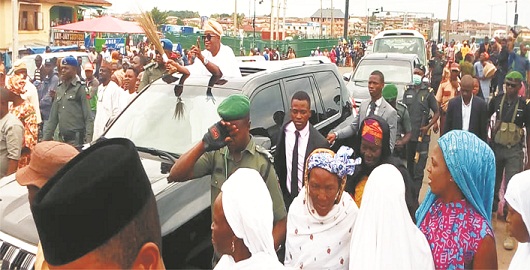 From Fisayo Akinduro, Osogbo
|
It was a triumphant parade for Osun State Governor, Mr Gboyega Oyetola yesterday as he waded through a mammoth crowd who trooped out to rejoice with him over his victory at the Court of Appeal.

Oyetola was spotted at the Appeal Court, venue of the judgement yesterday morning.

The governor whose victory was upheld by a split judgement of the Court of Appeal, Abuja Division beamed smiles as his motorcade rode through major streets in ecstatic jubilation.

Oyetola sporting a flowing native gown ‘Agbada’ with cap to march waived at the jubilant crowd amidst drumming and slogannering of his popular slogan ‘Ileri Oluwa ti se (God’s will has prevailed).

From government house, the victory parade passed Oke-fia through Alekuwodo, Olaiya and some major streets to Oja Oba where vehicular activities stood still for hours amidst frenzy celebrations.

While addressing the crowd, Oyetola described the judgement as a long awaited expectation of the people of the state.

The governor said he could not hide his happiness upon receiving the news of his victory at the Appeal.

He said the facts have been revealed already by the Appellate court saying he would not be anxious if Senator Adeleke decided to approach the Supreme Court.

Oyetola said the people of the state, without being prompted, trooped out to join him in the jubilation.

Oyetola stressed that he is not bothered about the PDP approaching the Supreme court, saying facts have been stated already by competent courts.

“We are ready for them. Even the people of Osun are elated as you can see and this shows that we will win again at the Supreme Court.”

A political analyst, Babafemi Omotosho while speaking with The Hope adjudged the decision of the court saying judiciary in Nigeria has a future.

He said the unclear verdict of the tribunal in its split judgement on March 22, 2019 which was upturned at the appelate court is an indication that fairness and equity is being observed, hence the need for the judiciary to always uphold the truth.

Omotosho stressed the need for the opposition party to support the government in power in order to fast-track the development of the state.

Also speaking, a chieftain of the All Progressives Congress, APC, Mr Olukorede Obaditan while reacting to the verdit said Nigerians should have the spirit of sportsmanship.

He said Nigerians should learn how to put things in order, noting that if there was no prejudice in the first election, there won’t be a rerun.

Meanwhile, the Chairman of Peoples Democratic Party in the state, Mr Soji Adagunodo said the judgement is based on technicalities which will addressed at the Supreme court.

“With the evidences presented, we expected victory but that is democracy at work. We are approaching the Supreme court.”