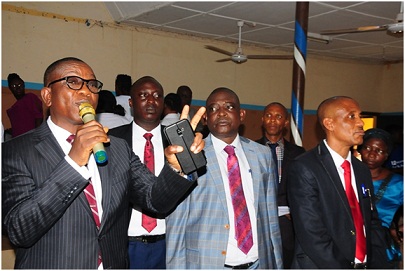 The  on going verification exercise of local government workers  in Ondo State is to ascertain  the number of genuine staff working in the councils.

The State Head of Service, Mr Dare Aragbaiye who made this known while monitoring the exercise in Akure South Local Government Council Secretariat  said the exercise is in the best interest of both the workers and the government.

Addressing  the workers, Mr Aragbaiye said the verification is to identify the actual number of workers that are the payroll of government, saying that it would also eradicate ghost workers .

He therefore enjoined the workers to cooperate with the government, saying that the exercise was not meant to put unnecessary suffering on them.

Commissioner for Local Government and Chieftaincy Affairs,  Lola Fagbemi also described the verification exercise  as a normal routine with no ulterior motive .

The Commissioner while addressing  council workers in Akure South, Idanre and Ondo West Local Governments while monitoring the exercise said the entire workforce will be better for it afterward.

In her words, planning is essential for any administration to succeed. Exercise of this nature was last carried out in 2013 and outcome will yield positive result.

The Commissioner was accompanied by  Permanent Secretary, Chief Segun Odusanya, his counterpart in the local government Pension Board, Comrade Bunni Eniayewu as well as the NULGE State Chairman, Comrade Taiwo.

He said those concerned  are to come to the verification centres with their letters of first appointment, last promotion letters and they must be identified by their Heads of Department.

At Okitipupa Local Governments Secretariat, workers  came out in large number to partake in the verification exercise .

While sensitizing the workers before the commencement of the exercise, the Caretaker Chairman of the council, Omo’ba Abayomi Adesanya appealed to the workers to conduct themselves in a well befitting manner.

Abayomi commended the state government for the initiative which he described as ” noble idea”  that will not only help to eliminate ghost workers but  help  proper planning and budgeting which will in turn help to create  jobs.

He allayed the fear of the workers not to see the exercise  as an attempt to witch-hunt anymore but as a periodic exercise that must be commended.

Also speaking with The Hope, the head of the team, Mr. Isimijola Oluwafemi said the exercise which is expected to capture all the local government staff, primary school teachers and pensioners in the 18 local governments in the state was going on smoothly except for the initial hitches that occurred with the biometric capture which had  been rectified.

Some of the workers Interviewed expressed their joy with the State Governor, Arakunrin Oluwarotimi Akeredolu which they described as “workers friendly”.

They however appealed to the government to create more job opportunities especially in the junior cadre, saying it is hard to find workers within level 1 to 6 in office thereby making it difficult to get messenger or cleaners in offices.