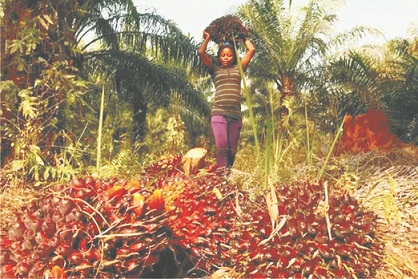 By Kehinde Adejumo
|
Araromi-Obu in Odigbo Local Government area of Ondo State, is situated midway between Ondo and Ogun states, it has a boundary with the Ikales in the East and South, in the West with the Ijebuland and Igbindo in the North Araromi-Obu originated from Ile-Ife the ancestral home of the Yorubas . It was established by Agboligi Adetosoye, he was also known as Obu Alakika or Ode Obu.

The staff (Akika walking stick) given to him due to his old age by Olofin Oduduwa was to serve as a guide to help him know where to settle with his people , the instructions he was given was that anywhere he stocked the walking stick and it sprouted out leaves the following day, there he would settled. When he did as instructed, after many attempts he finally got to Obu where his walking stick sprouted out leaves, he named the place Obu-Alakika or Ode Obu.

With him were some people and materials which are now part and parcel of Araromi – Obu’s culture.

These materials served as factors for peace and social harmony among the people. The materials include Akika tree, (the walking stick that turned to tree) Ada Orisa (sceptre), Obalufon Bronze and Beaded Crown. They also came with so many festivals that are still been celebrated in Araromi-Obu till today. These festivals include such as Agbadumu Enuowa, Agbadumu Abote, Akaaba, Egan, Agemo and many others.

Among all these festivals, Agemo stands out due to its place in relation to the Ashuba shrine which was the security gate to Obu Alakika, the ancestral home of Araromi-Obu people, the name Ashuba was coined from “a se uba” meaning “we perform rites.”

Ashuba deity had offered protection to the people of Ode Obu from external attack during the era of inter – tribal war. Explaining how the deity does this, the people said: “A powerful spirit, called Sigidi dwells inside the marble stone. When invaders are about to attack the land, cobwebs would appear across the two big marble stones and a spiritual human figure (Sigidi) would come out from the ground, covered with smoke , stand on the cobweb to give signal of incoming war to the people of the then Ode – Obu, this deity can crow as a cock and it may bleat like a goat to alert the people of the looming danger.

When this happens, the people quickly offer it a he goat. Having sacrificed the goat, it would divert the invaders movement or provide poisoned edible fruits which when they(the enemies) eat, they would die.

This prevented invaders from invading the kingdom, until the Ago war led by a powerful warrior called Ago from Ile-Oluji came and scattered the whole Ode Obu due to their refusal to offer the Sigidi the required sacrifice.

After 30years of being in exile, the people of Ode-Obu re-settled at a place called Araromi-Obu, but the people of Obu-Alakika scattered to various places like: Idiogba Obilayo, Lipeti, Idita, Ajagbale Oke and Ajagbale Odo. In a bid to come back together again, they settled 10 miles apart from their ancestral Obu-Alakika and they named their new settlement Araromi-Obu.

This Kingdom is very rich in culture the prominent among them is Agemo festival which is normally celebrated in the month of March annually and is the only Kingdom in Ondo State that celebrates Agemo festival with a good number of communities in Ogun state.

Ode-Obu, their ancestral home housed some of substantial relics of the past and some heritage sites like Ashuba Shrine, OmiOyen, Egungun Tree(the tallest and biggest tree where men of the olden days sat for relaxation during festivals. It is about 18 meters by 150meters, Obu stone (a mysterious stone that went back to its original position after it has been removed several times during road construction).

Araromi Obu housed Araromi Ayesan Oil Palm Plantation and Rubber Estate Nigeria Limited which were established by the then Western Nigeria Government in 1953 and 1954 respectively under the leadership of Chief Obafemi Awolowo.

These two companies are saddled with responsibilities of producing palm oil in commercial quantity and processing rubber for exportation to the Michelin Rubber Company abroad.

Another notable project in the area is the Ondo State owned Afforestation Project established in 1978 in conjunction with the World Bank. All these companies created employment opportunities for the people of Araromi Obu. Recently the Araromi-Ayesan Oil Palm Plantation PLC employed over 400 people of the area.

The Ajobu of Araromi Obu HRM, Oba Aderemi Adelola commended the people of the area for their support for his administration. He also commended the government of Arakunrin Oluwarotimi Akeredolu for its efforts restoring electricity to the Southern Senatorial District of the state that been thrown into darkness for the past ten years. He appealed to the contractors handling the electrification project to expedite action in order to complete the project at the stipulated time.

Oba Aderemi Adelola also appreciated the management of Araromi-Ayesan Oil Palm plantation PLC for their efforts in repositioning the company and making it profitable.