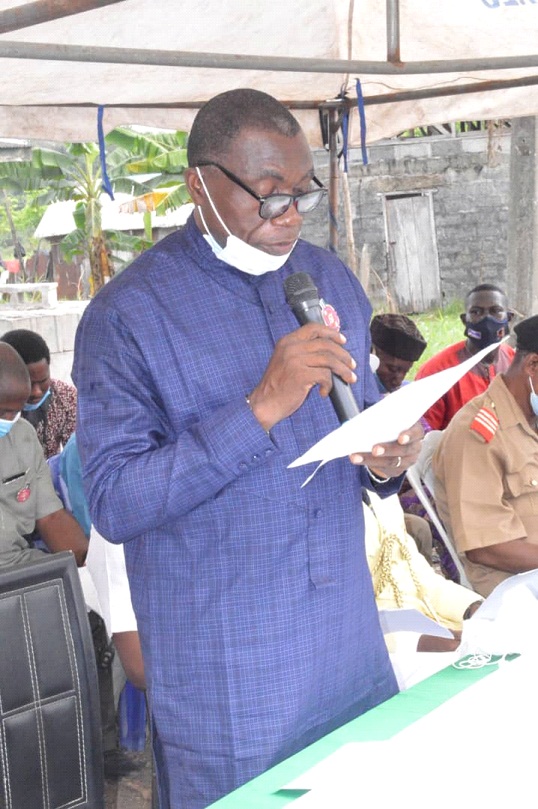 The Chairman of Ilaje Local Government Area of Ondo State, Mr Olamigoke Jatuwase, has said that Nigerians must remain united to celebrate and honour the fallen heroes, who laid down their lives for the unity of the country.
Speaking after performing the laying of wreath in commemoration of the 2021 Armed Forces Remembrance Day Celebration’s grand finale held at the Cenotaph Ground, Igbokoda, he said that the import of the celebration could not be over emphasized as it signified the great sacrifice put in by the fallen heroes to ensure the unity of the country.
Jatuwase, said “every January 15 is intentionally set aside for all Nigerians to come together to remember our past heroes and the whole essence of being Nigerians is for us to live peacefully, conducively and congenially as a united country and some people have laid down their lives for us to be here today”
The chairman appealed to the people to seamlessly extend hands of assistance to the legionnaires in whatever capacities that they could be gainfully engaged and integrated, adding that the APC led government in the country under the able leadership of President Muhammadu Buhari (GCFR) would as ever continued to support and care for our Armed Forces/Veterans and the legion.
He further said that our own Governor in Ondo State,Arakunrin Rotimi Odunayo Akeredolu(SAN)would in his heartfelt concern for Ex-service men keep on enhancing the legion.
Others who performed laying of wreath included the Representative of Commanding Officer of Nigeria Navy (FOB) Igbokoda, Lt.CDR S. Samaila, the Legion former chairman in Ilaje local government chapter, Major Demehin( Rtd), the Representative of Divisional Police Officer, DSP Kanu U.
Kanu, Benedict Osademe of Immigration Service, the representative of NSCDC, and a widow, Mrs Agbude Yemi.