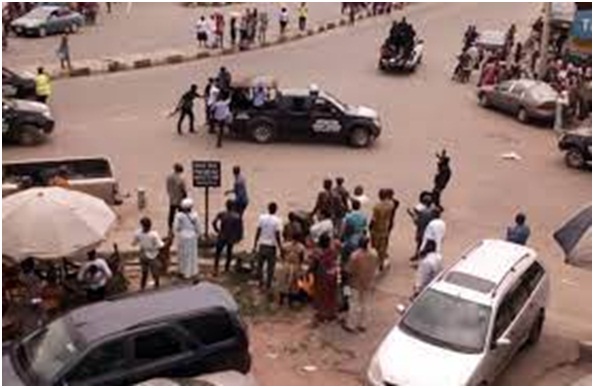 Following series of killings due to cult clashes and other issues of insecurity in Osun State, joint security operatives on Thursday paraded major streets in the state in a show of force.
Patrol vehicles involving personnel of the Nigerian Army, Police, JTF, and Nigeria Security and Civil Defense Corps moved round the state capital around 8 am. The team, blaring siren, moved through Dele Yes sir roundabouts through Oke-Fia to Old Garage before heading towards Ayetoro to Powerline area.
When contacted, Osun Police Command spokesperson, Yemisi Opalola said the joint patrol is a message to miscreants who might be planning to disrupt peace across the state.
Also, the Special Adviser to Governor Adegboyega Oyetola on Security, Mrs Abiodun Ige, said the patrol is a show of force to assure residents that government would not tolerate any act of disruption from anybody.
“It is a normal show of strength. We are just trying to make sure we do everything possible to secure the lives of the citizens of the state and also to tell the people that nobody can just start or do things under the claim that they are free to do whatever they like. Everybody should know that the situation in the country is tensed. We should just go about our business without fear.
“On June 12, protest, there is freedom of expression, freedom of movement as enshrined in the constitution. But when people intend to protest, they should know that some people will be planning evil. We don’t want to restrict anybody’s movement, but whoever is embarking on protest should ensure that it is not hijacked by hoodlums.
“If it is a peaceful protest to express grievances fine, but should not be hijacked by hoodlums. Those that want to protests should do it within the armpit of the law”, she said.