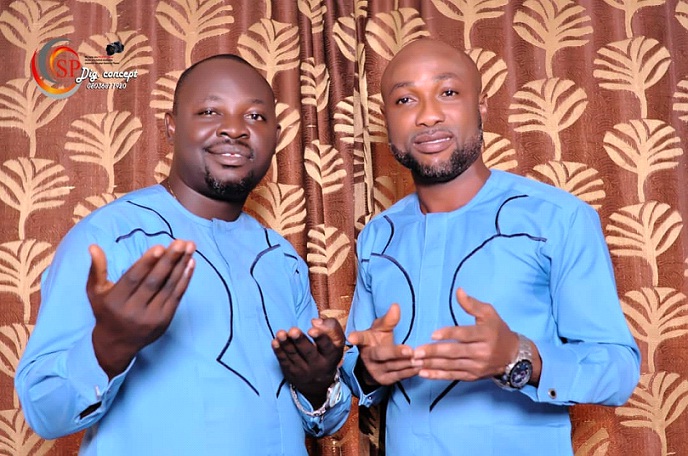 A gospel musician, Evangelist Olubanwo Abimbola-Abai has attributed the downfall of many gospel musicians to arrogance.
Olubanwo, who is one of the duet popularly called Oluwale Aniyikaye Gospel Music, said that arrogance makes artistes lose face with the fans.
“My advice to upcoming artistes is that they should learn how to endure and be respectful because there’s no musician that is arrogant that can go anywhere.
“This is because by the time you are rude to your fans, nobody will patronise you”, he noted.
The graduate of Nigerian Institute of Journalism, Lagos State while speaking with Friday Extravaganza also advised upcoming gospel artistes to be liberal, friendly, read their bibles and always listen to good music.
He said, ” If you have been told that this is your way, don’t just jump into it. If it is your way, you will definitely get there.
“As a musician, you need to listen to different musics if you want to be a good musician. You learn how to listen to bad and good music, then you will be able to compare. Some people don’t listen to other people’s music. They believe in what they do. You must listen to others then you pick ideas”, the artiste with over 15 years of experience further advised.
According to him, the name “Oluwale Aniyikaye” was a combination of his name and his partner’s, Adewale.
“We met in a church where I used to sing when I was a choir master. So, my partner came there. I hadn’t known him then. He came to worship in the church. He saw me, from there he developed interest in me.
“After my ministration he came to me and said this guy you are good o and I told him the same thing and asked me that can we work together and I replied yes, that was how we started our journey”.
“We use to force ourselves on people when we started. For an artistes that were still unknown, we used to tell people that we can play in any of their ceremonies, we hire some few speakers we get it done.
“It got to a certain time, we decided record our first album Titled Ayanmo in the year 2008 to make us relevant in music industry,” he explained.
The duo have produced five albums so far, adding that they both composed songs together and whenever they went for outings, they shared their gains equally.
Olubanwo identified Holy spirit as his mentor and he followed the footsteps of Ebenezer Obey, Late Raphael Samah, Late Remilekun Amos, Prince Debo Ojugbuyi, Evangelist Olola Peter andd Felix Omushowoni.