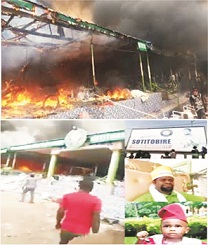 The State Commissioner of Police, Mr. Undie Adie who confirmed the arrest of the suspects said his men were  on the heels of more suspects in the arson which left three people dead and scores injured.

According to the Commissioner, following the incident, men of the Nigeria Police Force swung into action  to quell the protest and  avoid a breakdown o f law and order.

He said “Investigation is ongoing and I can assure you that any person linked with the incident won’t be spared.

Yesterday, we were able to arrest 10 persons and they are in our custody. We also intercepted a vehicle carrying some of the property  looted from the pastor’s house. The police were able to protect the pastor’s house from been set ablaze but some of his property were looted and some of his cars were damaged but the cars have been moved to state CID”.

Adie confirmed the death of a Sergeant police officer and two civilians, disclosing that another Policeman was critically injured.

The Commissioner appealed to residents of Akure to be law abiding citizens and detach themselves from any unlawful act capable of putting them in trouble.

A police  sergeant, said two civilians  died in the protest while many houses and vehicles were set ablaze by  the mob acting on a rumoured discovery of the corpse of the missing boy in the church premises.

The family of the missing child has  absolved themselves from the violence , insisting that they knew nothing about the arson and  loss of lives.

The   mother of the missing  child, Mrs. Modupe Kolawole who spoke with The Hope called on Nigerians to join the family in praying  for  the recovery fo their son.

Meanwhile, tight security has been mounted around the  charred remains of the  church.

Our reporter who visited the once majestic looking church yesterday observed that  smoke was still bellowing from the bowel of the destroyed  church.

Apart from visitors milling around the burnt church, our reporter also observed that normalcy has returned to the Oshinle headquarter of the popular miracle centre.