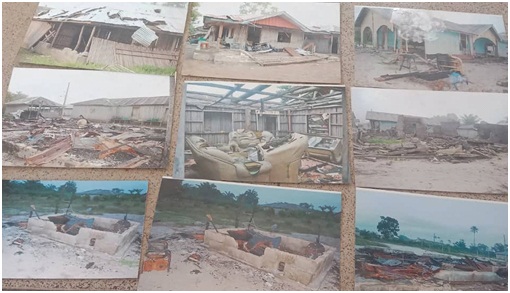 Lay Guy had previously contested for the title of Warrant Chief in Agobiri Quarters of Arogbo Ijaw Kingdom.

Akins Tiewei, Love Sofiyegha, Gbefayefa Batife Onana, Towei Kowei, Fiyesinkumo Ojogo , Firikoriwei Agitan, and Oni Adams were fingered to have carried out the attacks on the property of Alhaji Akerele Abdulateef Oweigbintiemo. Alhaji Akerele, who spoke on behalf of other victims of the attack such as Mr. Teimobomi Tafabofa, and Mr. Boubini Oweitongu, disclosed that the suspects were arrested and charged to court in 2014. They were arraigned at the Magistrate Court in Igbekebo, before Magistrate D.O. Ogunfuyi on December 23, 2014. The suspects were arraigned on a 17-count charge that bordered on conspiracy, arson, wilful and unlawful destruction of dwelling houses, attempt to kill, assault and stealing.

Several witnesses testified about how the accused persons, armed with cutlasses, sticks and petrol moved round houses of the complainants and destroyed them, even threatening to kill them in the process. According to the witnesses, all efforts by some other residents of the community to prevent the accused from carrying out the destructive acts proved abortive.

Having listened to the testimonies of the witnesses and received exhibits that were tendered before it, the court was able to establish that there was indeed pandemonium in Arogbo on April 21, 2013 over the death of Lay Guy; the complainant’s house and other buildings were destroyed and burnt as a reaction to the death of Lay Guy; the complainant and his family members whose houses were destroyed did not support late Lay Guy for the title of Warrant Chief in Agobiri Quarters of Arogbo; and that all the defendants supported and participated in the installation of late Lay Guy as the Toripowei of Agobiri Quarters in Arogbo.

Though the defendants attempted to exonerate themselves from the crime and wrote in their statements that the destruction was carried out by late Lay Guy’s family, based on testimonies of witnesses and the exhibits available, the court found them culpable.

The court therefore sentenced them on July 20, 2017, on seven out of the 17 counts for which they were tried, with an option of fine for each. The court also ordered them to pay compensation sums to the victims of the April 2013 attack.

The judgement read in part, “Provided that whereby the defendants fail to restore the aforementioned, each of them shall be liable to imprisonment for five years with hard labour.”

However, early this year, the convicted persons finally filed their appeal before the Ondo State High Court, Okitipupa Division. Having examined the case, Justice D.I. Kolawole, on October 19, 2022 affirmed the judgement of the Igbekebo Magistrate Court, stating that “the appeal is without merit and is bound to fail and it fails completely.”

This means that the five-year jail term pronounced on the men who were found to have destroyed the property of Alhaji Akerele and his relatives still stands.

The plaintiffs, Alhaji Akerele Abdulateef Oweigbintiemo, Mr. Teimobomi Tafabofa, and Mr. Boubini Oweitongu, in a statement made available to journalists, stated that the members of the public, especially the Teaching Service Commission and the Local Government Commission where two of the convicted persons are members of staff (Akins Tiewe and Gbefayefa Batife Onana) should take note.

“It is also expedient to use this medium to inform the Commissioner of Police and other security agents that the said convicts are still moving freely in Arogbo Community, whereas, they are supposed to be returned to the Prison (Correctional center) in line with the latest High Court judgment in Okitipupa.

“The Judgements both at the Magistrate Court, Igbekebo, and that of Okitipupa are public documents which can be accessed and verified by any person,” the statement said.

Alhaji Akerele who doubles as the Chief Imam of Ese-Odo and is also one of the plaintiffs, said it is unusual seeing convicted persons who are supposed to be in the prison moving freely on the streets. He said that although they were given an option of fine and also to pay for damages, none of these was met. He said the convicted persons were to serve a five-year jail term as affirmed by the High Court of Okitipupa but they were still seen moving freely in the community.

The Chief Imam, therefore, called on the appropriate authority to justify the court ruling and implement the order. According to him, the convicted persons are rusticated human beings, hardened criminals, and callous, warning that authorities where they work should keep a distance from them.

He advised the Local Government Service Commission, Teaching Service Commission, the Arogbo traditional council, and the PDP Arogbo ward 1 where Gbefayefa Batife Onana of Ese-Odo local government, Akins Tiewei of Arogbo City Academy, Love Sofiyegha of Arogbo Ijaw traditional council and Towei Kowei of PDP Arogbo ward 1 should be avoided because they have been convicted at both the lower court (Magistrate Court) in Igbekebo and the High Court in Okitipupa.