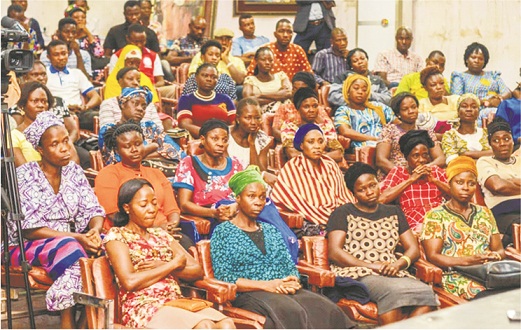 By Ilemobola Michael
|
June 22, 2018 was a sad day for no fewer than 76 traders at a section of the Oja Oba Akure, the Ondo State capital. Like a thief in the night, whose sole aim is to kill and destroy, a midnight fire broke out at the market and destroyed properties worth several millions of naira, leaving the victims in sorrow.

On that fateful day, the world seemingly came to an end as most of the victims lost their various sources of livelihood. For them, the future looked bleak with no hope of returning to their business.

The victims wailed and groaned over the unfortunate disaster. This is because many of them were already owing many micro-credit agencies – where they had taken loans to engage in the business before the incident occurred.

But hope first appeared for the victims when Governor Oluwarotimi Akeredolu (SAN) visited the scene of the disaster to sympathise with the fire victims and promised to assist and return them to their businesses.

The governor recently made good his promise to lift the victims out of their gloom when he mobilised resources with the sole aim of restoring hope to the seemingly hopeless victims.

Depending on the degree of their individual loss, the state governor, represented by his deputy, Mr. Agboola Ajayi, shared N26 million among the distraught fire victims. This was beside a few other mollifying measures promised them by the governor who was referred to as “Our Hope” by the beneficiaries of the cash gift. The least given out was N200, 000, while others got N500, 000 each.

At the Cocoa Conference Hall of the Governor’s Office, where the money was shared among the fire victims, the deputy governor said it was not in Governor Akeredolu’s character to ignore the very people he swore to protect, especially when they were distressed.

He told them that though the money might not be able to repay all that was lost in the inferno, he expressed optimism that the state government’s gesture would provide succour for them.

The deputy governor said: “We may not be able to repay all that is lost but I am very sure this will bring succour, like a palliative.

“The ultimate responsibility of the government is to protect the lives and properties of the people and to be responsive to their yearnings, one of which is to come to their aid in case of emergency or disaster.”

The Deji of Akure, Oba Aladetoyinbo Aladelusi, who led the beneficiaries to the Cocoa Conference Hall to collect the cash gift, did not hide his excitement over the government’s gesture.

The monarch hailed the state government’s gesture as commendable.

Oba Aladelusi was particularly delighted that in spite of the paucity of fund the state government is battling with, Governor Akeredolu still considered it necessary to cough out N26 million to put smiles on the faces of the fire victims.

The monarch said the beneficiaries would be grateful for the intervention because the money was not a repayable loan, but an intervention meant to empower the victims.

He said: “Governor Oluwarotimi Akeredolu will be not be forgotten for this laudable decision. Yes, the victims that thought that they had lost their source of  livelihood can now go back to their various businesses with renewed hope and smile.”

The disbursement of the N26 million cash gift was described as transparent by the beneficiaries who praised the governor for rekindling their hope.

Speaking on behalf of the fire victims, Mrs. Bisi Bakare, thanked the governor for wiping away their sorrow. She was particularly full of praise that the process of compiling the list of the victims up to the payment of the recoupment was transparent.

A renowned Akeredolu’s critic, Mr. Williams Ogunbadejo, who is always critical of the governor’s administration’s, commended the governor for not keeping the victims waiting endlessly.

Ogunbadejo, a social scientist, expressed the belief that the gesture would improve the economic lives of the victims and their families.

He said: “I have to be honest, it is not always rosy when someone loses his or her source of livelihood. But I must confess that there is no need criticising the governor unnecessarily for lifting the spirit of distressed people. In fact, I commend his administration for this laudable response to this particular set of troubled traders. At least, they can go back to their business locations with renewed hope.”