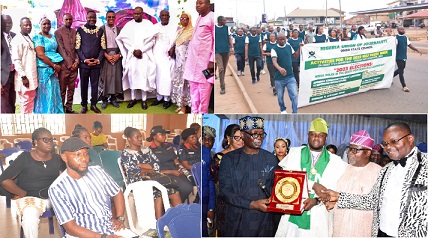 As the saying goes, all work and no play makes Jack a dull boy. For members of the Nigeria Union of Journalists (NUJ), Ondo State Council, 2022 was not an exception, as they gathered to mark this year’s edition of the Press Week.

This year’s edition which began on November 27 and ended on December 2 had a lecture titled “2023 elections: Media Roles in the Quest for Desirable Leadership.” Considering the fact that Nigeria is gradually approaching general elections to hold February next year, the choice of the lecture theme for this year’s press week can be said to be highly commendable.

Though the Week began with a thanksgiving service on Sunday November 27 at the Salvation Gospel International Christian Centre, Akure, the event was formally declared open on Tuesday November 29 by the Governor of Ondo State, Arakunrin Oluwarotimi Akeredolu, represented by Mr Kunle Adebayo, Chairman of OSRC Media Group.

The public lecture on Tuesday where the 2022 edition of Press Week was formally declared open had in attendance Bashorun Ifedayo Adedipe SAN, candidate of the People’s Democratic Party (PDP) for Ondo Central Senatorial District at the forthcoming elections who was one of the lead speakers; Professor Davies Folorunsho who represented the special guest of honour and Minister of State for Transportation, Prince Ademola Adegoroye; and many others.

In his speech, Bashorun Adedipe, (SAN), a legal practitioner, identified various kinds of leaders, such as transformational, revolutionary and motivational leaders. He cited transformational leaders such as Abraham Lincoln during whose time slave trade was abolished; Nelson Mandela who came out of prison after 27 years and sought reconciliation instead of vengeance; and Chief Obafemi Awolowo who ruled Western Region as Premier for eight years and formulated policies that have continued to transform the Region.

Speaking further, Adedipe pointed out the constitutional role of the media in ensuring accountability among political leaders.

He said, “of all the institutions you will read about in the constitution, the press is the only one singled out to hold the government responsible. So, one of the roles of the media in the forthcoming election is to hold whoever emerges as leader responsible.

“Unfortunately, the candidates have not been engaged the way they should be. In the animal kingdom, the strongest rules but among humans, especially Africans, we tend to have reluctant leaders. It is the role of the press to help people make the right choice.”

The legal luminary beseeched the press to engage candidates on how they intend to achieve whatever they promise the electorate, saying “If you don’t ask relevant questions, you won’t get the correct answer. If you make the wrong choice, you will suffer the consequences.”

Adedipe also charged the media to always investigate political office seekers and educate the public about their backgrounds, while examining how well a government has performed from time to time.

Speaking on vote buying, he promised not to be involved in the act, saying only politicians who have nothing to offer engage in it.

He said, “It’s people who know they can’t win that will induce voters. Only God knows where they raised the money from. How do we stop this scourge? It’s by a very sturdy application of the law. Unfortunately, I am not aware if anybody has been charged to court for that. We can only appeal to security agencies to be on guard, apprehend and prosecute perpetrators. We can build a better society if quality people contest and occupy offices.”

He equally commended Governor Akeredolu for his giant strides in office, especially his doggedness in championing the creation of Western Nigerian Security Network, codenamed Amotekun, and asked NUJ to challenge other governors to follow suit.

In his own address, the state Governor who was represented by Mr Adebayo stressed the need for everybody to shed the toga of politics and embrace issues that will lead to development. He stated that there should be cooperation between the media and the government.

The State Governor who doubles as Chairman of Southwest Governors’ Forum equally charged the NUJ to look into the composition and functions of the Independent National Electoral Commission (INEC), and educate the public on the need to decentralise it.

The governor noted that the electoral body has about 10 functions, some of which have separate bodies to perform them in developed countries and even some neighbouring African countries, saying “We cannot have better leaders if we don’t pay a closer attention to the process that produces them.”

Before officially declaring the week-long celebration open, the number one citizen of the state encouraged journalists to continue to do more, even more than they had been doing.

Earlier, Chairman of NUJ, Prince Leke Adegbite, in his address, promised to continue to defend the interest of members and maintain the integrity of the union. He disclosed that the union recently sponsored some members for a training on coverage of the 2023 elections.

The Chairman who said that it had been difficult to achieve that feat for the past two years assured that another training would come up before the end of this year.

He also enjoined politicians to liaise with the union’s taskforce to fight and defeat quackery by verifying the identities of journalists who approach them for interviews, saying, “we have the best crop of journalists in Ondo State. Currently, we don’t have any of our members facing litigation, unlike what is obtainable in other states.”

Meanwhile, the Chairman of the occasion and Minister of State for Transportation, Prince Ademola Adegoroye, represented by Professor David Folorunsho, in his goodwill message, assured participants that he has always been a friend of the union and would remain so. He advised that the NUJ should shun quackery, especially in electioneering period.

In his opening remarks, Chairman of the Organising Committee, Shina Adeyeye, had stated that the essence of the media week was to celebrate journalists, both serving and retired, and also to reward journalists and other individuals who had distinguished themselves.

He stressed that the awardees were carefully selected and encouraged them to keep up the good work.

Other events that spiced the Press Week included free medical screening for journalists, veterans, and their spouses, a visit to an orphanage, which took place on Monday; endurance trek or health walk, children’s party and finals of indoor games; a novelty football match and Asun night. At the novelty match, NUJ defeated NLC 1-0.

To wrap up the programmes, there was a Jumat service at the Akure Central Mosque, followed by Dinner and Award Night at the NUJ secretariat on Friday.