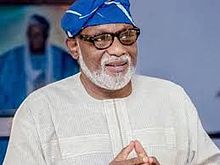 From Jimoh Ahmed, Ikare Akoko.
|
Excited by the presence of heavy construction equipment on the Okeagbe/Afin/Ese road, residents, motorists and farmers in Afin and Ese two separate communities in Akoko North West Local Government area of Ondo State have commended Governor Oluwarotimi Akeredolu of Ondo State for making true his promise to rehabilitate the road.

Residents and commuters as well as motorists have been battling with the deplorable condition of the road for long and so when the Commissioner for Works and Infrastructure, Alhaji Saka Yusuf Ogunleye came to flag off the construction last Friday, many thought it was one of the political gimmicks of politicians.

However, it dawned on them that the present administration in the state is committed to fulfilling its promises.

The road had been abandoned for over 20years making it difficult for vehicles  to ply as okada is the most popular means of transportation at an exorbitant fares as disclosed by a community leader, Alhaji Ibrahim kilani.

Alhaji Kilani told The Hope that socio-economic activities in the area were completely shut down as farmers could not convey their products to the markets in the urban areas because of the inaccessible roads.

The Afin Akoko born Akoko community leader gave kudos to Governor Akeredolu for not forgetting rural communities dwellers, who are predominantly farmers and who rely much on farm products to make ends meet.

He noted that both Afin and Eshe community will never forget the governor as this will equally reduce rural urban drift by young school leavers.

Equally, he praised the tireless efforts of the State Commissioner for Town Planning and Urban Development ,Alhaji Rasheed Badmus who is also an indigene of Afin Akoko, who has continuously assure his people of the governor’s fulfilment of his campaign promises.

A transporter, Mr Abu Temitero expressed the hope that the government will put contractors on their toes to complete the road project as scheduled.

A market woman and the Oloribirin of Afin, Chief (Mrs) Abike Akintola also praised both Governor Akeredolu and Alhaji Rasheed Badmus  for coming to the rescue of the ancient towns affected by the road.

The Oloribinrin noted that on completion of the rehabilitation of the road,   market women will be patronising both Afin and Eshe markets.

The road project being handled by Cappa and Dabalto Construction Company, one of the leading names in the construction industry was flagged off on Friday by the State Commissioner for Works and Infrastructure,   Mr Saka Yusuf Ogunleye.