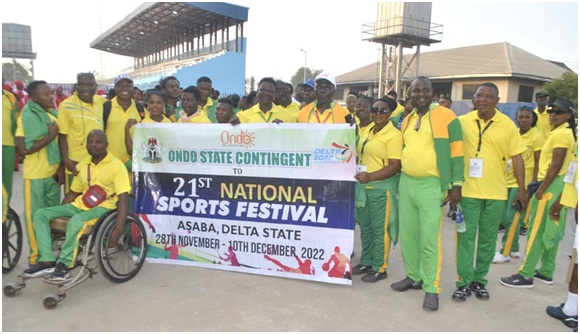 As over 12,000 athletes from the 36 states and Federal Capital Territory compete for honour at the 21st National Sports Festival in Asaba, Dagba Samuel and  Ajiagbani Seiduogha have ended team Ondo search for most precious medal as the duo won Gold in Rowing Kayak para- mixed doubles category three.

The Sunshine State has won twelve medal, one gold, three silver and eight bronze medals in the 13th day competition .

The State’s table tennis men’s team settled for Silver after it went to the host Delta team 3-2 in the final, while Olowoniyi Sunday and Afolabi Kayode also lost to same host in para- deaf men’s doubles to record second silver.

Meanwhile, Ondo state para swimming coach Jayeoba Oseyemi expressed optimism that her team wutld do better even as they prepare for more challenge in the swimming competition.

Jayeoba stated this shortly after one of her swimmers, Powei Ofoyeju won silver in men’s 200mtr individual Medley.

As at the time of filling in this report, team Ondo have been able to gather twelve medals which include one gold, three silver and eight bronze medals.