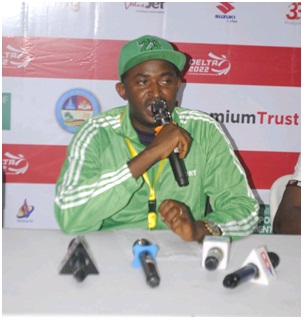 Nasarawa Commissioner of Youth and Sports Development, Lucky Isaac Yargwa has charged the organisers of the ongoing 21st national sports festival to stick to the rules and regulations guiding the competition.

He urged them to ensure that talents, irrespective of the state they come from, are discovered and be nurtured to represent the country at international sports meet.

The commissioner said  the organizers must put search lights in and around Event Centres to ensure that the aims and objectives of the Sports Festival are not eroded by selfish stakeholders whose motive is to favour some states at the expense of others, due to pecuniary gains.

He stated this while addressing journalists at the media center of Stephen Keshi Stadium, Asaba.

He said Nasarawa prepared very early for the Sports Festival,saying they were among the first states to arrive Asaba.

Yargwa said: “With our early preparation, we are very confident of surpassing of previous National Sports Festival medal records.

“The 20th edition of the national sports fiesta held in Edo State was one of their best outings since the Festival began in 1973, about 49 years ago, in Lagos.

According to him ,”Team Nasarawa won a total of 22 medals, which include 5 gold, four silver and 13 bronze medals, and finished 18th out of 36 States and FCT, Abuja, on the medals’ table.

“From the entire 19 Northern States and FCT, Abuja, only three States(namely, Kano, Plateau and Kwara) and FCT Abuja, did better than us at the last edition of the Sports Festival, even though we went with fewer sports events.

“Some of our athletes are already in the medal stage in some sports, and before the end of today, we should have more medals in our cabin.

“There are many other sporting events we are yet to commence participation in.

“But I want to assure you that before the end of the Festival, Team Nasarawa will be among the top ten highest medal-winning states.

“Our athletes and coaches are more than motivated to deliver results,” he said.