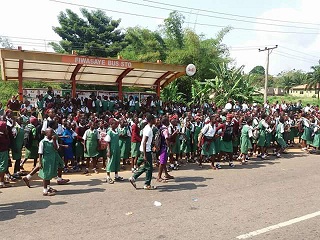 By Bukola Olamona
|
As schools resume today, Permanent Secretary, Ondo State Ministry of Education, Science and Technology, Rev Akin Asaniyan has assured that the Quality Education Assurance concept will take its full course this session by ensuring that schools are monitored as and when due.

Asaniyan gave  this assurance    in an interview with The Hope in his office.

He said the principals and headteachers have been instructed to ensure that their schools are made clean so that when students arrive, there will be little work for them.

According to him:” We are now going to operate with work plans, for all our officers, at the headquarters, on the field  and in schools and I want to assure parents that this session is going to be a wonderful one and their expectations will be met”.

He also assured them of peaceful academic session, not only in the Primary and  Secondary Schools, but also in the tertiary institutions.

Also in an interview, the principal of Oyemekun Grammar school, Akure, Chief Stephen Ojo said teachers in the  school are ready for academic work.

The principal of Ogbe High School, Oda, in Akure South Local Government, Mrs Omotunde Fagbenro said they have been preparing for resumption for the past two weeks .

She said some parents have been coming to school, especially the parents of the new intakes and they were attended to.

She said the school authority has cleared the compound and that the students will clear their classes when they resume.

The President,  National Association of Proprietors, Chief Olufemi  posited that private schools do not joke with resumption because it is business for them ,adding that if they do not prepare well, they will lose at the end of the day.

He said “many of the private schools have resumed since last week preparing for the real resumption , clearing compounds, writing scheme of work, diary, so we have been preparing “.

A parent, Mrs Akinyemi Oluwakemi said it is a  normal thing for parents to prepare for resumption since the holiday was a long one,saying preparation for resumption by parents must have started long before now because there are a lot of things to be done ranging from  payments of school fees, buying school bags, buying lunch bags and many other things.