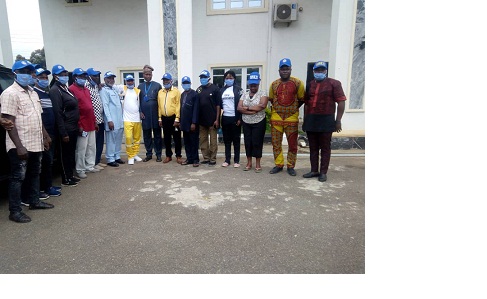 Aketi Sports Campaign Network (ASCN) has said the organization will aggressively mobilise sports men and women for the re-election bid of the incumbent Governor of Ondo State, Arakunrin Oluwarotimi Akeredolu across the state.
The Chairman of the organization, Prince Femi Akinruntan stated this in separate meetings with the Ondo State Chairman of All Progressives Congress (APC) Mr Ade Adetimehin, Professor , Wole Akeredolu and a member representing Ilaje constituency 1 at the state House of Assembly, Prince Abayomi Akinruntan.
The Chairman who was represented by the secretary of the organization, Mr Umar Lanre revealed that the team is comprised of Ex- Footballers and season’s Football administrators in the state.
According to him, “we did it for the Governor in 2016 and we are still ready to tow the same path again , our members are cut across the 18 local government areas of the state and we have been taking the gospel of the Governor’s giant stride both in sports and in other sectors to every nook and crannies in our different locality.”
“In 2016 we organized under 17 football competition for the Governor as a strategy to mobilise for his election.
He added that; “Football is a symbol of unity and we will continue to use the unity of the round leather game to effectively mobilise for the re-election bid of the government.
Both the party’s chairman and the House of Assembly member commended the organization for their support; they urged them to continue their mobilisation for the good of all.
Akinruntan who is the Chairman of Ondo State Gymnastics Association assured the organization of his support , saying the Governor’s re-election is a project for all, let continue to enlighten our people why they should vote for continuity in the state.