Home General Features At 68, who is afraid of Tinubu? 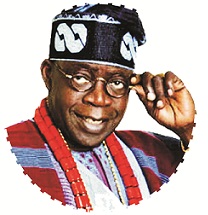 Without being immodest, National Leader of All Progressives Congress (APC), Asiwaju Bola Ahmed Tinubu can aptly be described as a political tactician and strategist imbued with high intelligent quotient, adept party organizer and a shrewd mobilizer of man and resources to maximize profit in the political arena.

Prior to this ongoing Mohammadu Buhari led APC administration, Asiwaju Bola Tinubu was destined through selfless and fearless political exploit in the defunct Action Congress (AC) to alter political scenario and mocking narratives in the country.

However, Alhaji Atiku Abubakar, the presidential hopeful in the Action Congress bungled the whole process. The rest is now history.

As Bola Tinubu turns 68 years in this terrestrial plane, let us magnify the Lord for his unique and outstanding contribution to humanity.

It is pertinent to highlight some of his humble yeoman services to good governance and nation building. All these solo contributions can be assessed in the public domain.

Without much ado, it cannot be denied or gainsaid that the invaluable asset of Asiwaju Bola Ahmed Tinubu will be effectively utilised in the post Buhari APC led administration.

For the National Leader of APC, Ahmed Bola Tinubu, no doubt a political colossus started as an intrepid political activist, on leave of absence as an accountant in the Mobil, a multinational corporation. He was elected as Federal Republic Senator under the platform of Social Democratic Party (SDP) 1991-1993.

Later in the dark days of General Sanni Abacha he was in the forefront of re-validating the annulled June 12 presidential polls won fair and square by the late business mogul, MKO Abiola, which forced him on self exile.

On his return, his pro democracy, struggle in the membership of the Militant National Democratic Coalition (NADECO) that produced the likes of Ajasin, Adesanya, Uncle Bola Ige and ‘Tony Enahoro. This earned Bola Tinubu to be elected Lagos state governor under the aegis of defunct Alliance for Democracy/Afenifere (1999-2007).

Besides, Bola Ahmed Tinubu was an active and financial member of NADECO which bared its fangs against military despotism in hanging to power sine die against the popular will of the electorate.

Bola Tinubu deployed his resources and personal liberty for the growth of justice, equity and liberal democracy in the country. He labored tirelessly and successfully without flinching to ensure that People’s Democratic Party (PDP) did not have any foothold in Yoruba nation.

Towards this end, Ondo State Leader of the defunct Action Congress of Nigeria (ACN), the late Chief Wumi Adegbonmire a.k.a Omo Ekun paid glowing tribute to Senator Bola Tinubu and gave him kudos for saving the Yoruba race from the “embarrassment” of ex-president Olusegun Obasanjo PDP led government.

It should be recalled, as sitting president, Chief Olusegun Obasanjo rabidly coveted and in deadly jealousy of the rising profile of the AD/Afenifere popularly elected governors vowed to put them on the rout.

To accomplish the dastardly act, political gangsterism and disorderliness were unleashed in Yorubaland. The gruesome and unresolved murder of Attorney-General and Minister of Justice Bola Ige (SAN) under the presidency of Olusegun Obasanjo remains a jigsaw puzzle and albatross on the incessant cry and strident clamour for justice in Nigeria.

AD/Afennifere governors were eventually walloped and ignominiously existed out of power under circumstances that were unseemly and unfair, save for the resilience of the Asiwaju Bola Ahmed Tinubu of Lagos State who stood strong and survived the PDP onslaught.

In the wake of blitzkrieg desperately launched by the then ruling PDP to overun the legitimate and progressive governments in the South West geo-political zone, all efforts to re-stretegise, geared towards reviving and re-branding Alliance for Democracy to serve the best interests of Yoruba and to extend its tentacles across the other parts of the country always met brick-walls masterminded and fuelled by the divide and rule tactics of president Obasanjo controlled federal government.

The end result was the several changes in nomenclatures of various political parties, alignment and re-alignment of elements of irreconcilable strange bed fellows until a destination was reached in the all conquering APC.

To prove that Asiwaju Bola Ahmed Tinubu is a reputable and redoubtable son of Yoruba, made up of sterner stuff and remain unpurchaseable by political filthy lucre.

The first port of call was in the inner sanctum Omolere compound, the residence of the State Leader of AD/Afenifere, Chief Reuben Famuyide Fasoranti OFR. Fasoranti was unanimously endorsed as Afenifere Leader, Senator Ayo Fasanmi as Deputy Leader.  While the former governor of Osun State, Chief ‘Bisi Akande as National Chairman of Alliance for Democracy.

The arrangement could have served as a strategic master stroke and put paid to the lingering crisis and imbroglio in the party and by extension in Yorubaland. There and then consolidated Ondo state as the stronghold of Afenifere/AD in accordance with the cherished unbroken dream of Obafemi Awolowo/Adekunle Ajasin.

However, some fifth columnists, desperate demagogues and fake Awoists within threw spanners into the good work. Here we are!

Restructuring or no restructuring, the APC stalwart, Asiwaju Ahmed Bola Tinubu must not suffer the same ill fate that befell Uncle Bola Ige at the threshold of becoming the widely acceptable leader of this country through the carelessness of Yoruba race.

Bola Tinubu is tested and astute political leader of Yoruba nation pr excellence. He has the wherewithal and capacity to lead; economic wizardry to frugally manage the resources of the nation for the benefit of all as Lagos experience exemplifies.

If God desires, Bola Ahmed Tinubu can become the next president of this country in 2023. He deserves our full supports and prayers in all nooks and crannies of Yoruba race.