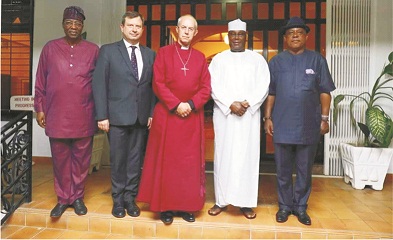 By Adekola Afolabi
|
The Ondo Central Senatorial candidate of Peoples Democratic Party (PDP), Senator Ayo Akinyelure, said the peaceful national convention of the party in Port Harcourt was a clear indication that the party is intact and united.

He spoke at a forum in Akure, the Ondo state capital.

Akinyelure added that the former Vice President of Nigeria, Atiku Abubakar emerged presidential candidate of the PDP at the convention through popular votes.

He further described the PDP national convention that produced Atiku as being credibly conducted.

“It was free, fair and transparent, devoid of any rancour. All the delegates from Ondo state voted Atiku to be the presidential candidate of our great party, and we thank God he won with clear and wide merging.

“All other aspirants accepted defeat in the spirit of sportsmanship and everybody was happy. Nobody was aggrieved and this showed that we are one united family. We will all continue to work for the interest of our party.”

Akinyelure also described Atiku as a man with a wealth of experience who is more than capable of ruling the country.