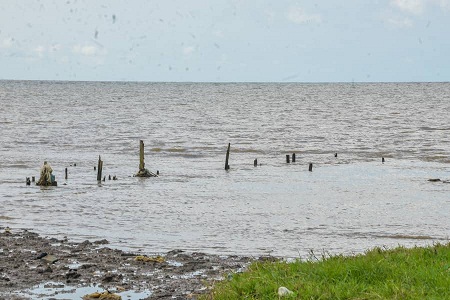 By Evelyn Omotoye & Martins Fasusi, Okitipupa
|
The Federal Government has expressed its determination to partner Ondo State Government to find a permanent solution to the lingering sea incursion ravaging the Ayetoro community in Ilaje Local Government area of the State and its environ.

The Minister for Environment, Ibrahim Usman Jibril who led the federal government officials including . Chairman House of Representatives Committee on Environment, Hon. Obinna Chidoka and the Permanent Secretary, Ecological Fund Office, Dr. Habiba Mudalawa, on assessment tour to the community recently made the promise.

While assessing the level of damage caused by the ocean surge, the team expressed  concern seeing the oil producing community being washed away by sea, describing the crisis as a monumental catastrophe.

The Minister said Ilaje Local Government, Ondo State Government and the Federal Government have roles to play in fixing the problem, adding that they would all put heads together to permanently resolve the issue.

Ibrahim particularly applauded the Arakunrin Akeredolu-led government for being proactive by sending in papers repeatedly to the Federal Government on the issue which he affirmed was being looked into.

His words, ” Just last week, a complete report of ecological problems across the country was submitted to the Federal Executive Council.

“It took couple of months for the Ecological Funds Office to send people across the country to do direct assessment of all areas of problems and Ondo State is not left out”.

Noting the complex nature of the problem, the minister said short, medium and long terms strategies would be deployed to address the problem.

“If we are going to have a long term strategy, we have to continue the engagement with the state government, the Federal Ministry of Environment and the Ecological Fund Office. We must put all our resources together to ensure that we start from somewhere.

“We need to get all our academicians. There are institutions of higher learning here and I am sure that those who are experts in Marine Studies, Ecological issues, Civil Engineering and others must come together. We will need experts not only in Nigeria but even outside the shores of Nigeria.

“There are people who had lived below the sea level and they have been able to reclaim their land and moved forward. Nothing stops us from understudying what they have done,” Ibrahim said.

Earlier, the Ondo State Deputy Governor, Agboola Ajayi who accompanied the delegation on the tour, had called on the Federal Government for assistance, saying the task of solving the problem is beyond the state .

Ajayi noted that though the Akeredolu led administration in the state had recently donated relief materials worth several millions of naira to the people, much is still needed to be done by federal government and international community to put a permanent end to the problem.

He however expressed optimism that the problem would soon be a thing of the past with the visit of the minister, noting that it was the first time the state government had been able to bring high level officials of the federal government to the incursion ridden area since the problem started ten years ago.

Also speaking, the Chairman, House of Representatives Committee on Environment, Hon. Obinna Chidoka said necessary legislation would be worked on to assist in salvaging the situation.

It would be recalled that the riverine community was reported to have been witnessing perennial  sea incursion for over 10 years with the recent occurrence in June this year. which caught the attention of the state government.