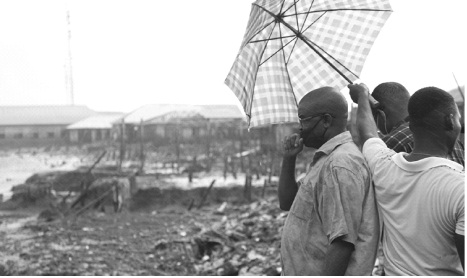 Ondo State Government has reiterated its commitment to protect lives and property of the people of Ayetoro Community through the embankment project initiated and monitored by the Nigeria Erosion and Watershed Management Project (NEWMAP) to secure the community from the ravaging Atlantic ocean.
The sea incursion, which has claimed 75% of the community’s landmass, has submerged its primary, secondary and technical schools and destroyed over 2000 buildings and crippled the economy of the people of the “Happy City.”
In view of this ugly development Governor Rotimi Akeredolu had approached the World Bank in a bid to finding a lasting solution to the problem; a move that was approved, signaling the commencement of the project some weeks ago.
The project had commenced with the introduction of Engineering Design by a consultant, Etteh Aro and partners with other activities such as boring and recovering of soil samples for laboratory analysis, survey on water for chemical analysis, biological sample collection of the sea floor, data collection from the community among others.
The project, however received another boost this week as a three-man team from the Federal Ministry of Environment, Abuja visited the community to inspect the level of damage done by the constant sea incursion to the community.
The team comprises Mr Wilson Uno, Mr Boniface Ogwuche and Mr Aba Simon.
Speaking during the inspection the Permanent Secretary, Ondo State Ministry of Environment, Mr Tayo Adeniyi, emphasized that Governor Akeredolu is committed to the actualization of the embankment project in the community, giving the residents rays of hope after many years of being bedeviled by the sea.
Mr Adeniyi assured that the project would be completed as soon as possible, so that the people can reclaim their land from the sea.
“From what we are seeing, if you are losing land, five metres on weekly or on monthly basis to the sea, something concrete must be done, something very urgent. In the next one, two months, something concrete will be done because if we don’t, we might lose this community to the sea” he explained.
Also speaking, the Ondo State NEWMAP Coordinator, Mr Marcus Adewodun said, “It was Mr Governor that enlisted the support of the World Bank in order to fix Ayetoro sea incursion which has ravaged the community beyond doubt.
His words, “The governor has approved the engagement of a design consultant; Etteh Aro and Partners. Within a space of a short time, they have delivered the draft engineering design, draft report and draft drawing, which we have reviewed.