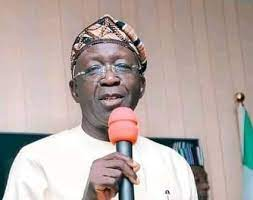 The Party’s Director, Media and Publicity, Mr Leye Igbabo made this known in an interview with The Hope.

Igbabo who stated that the party cannot afford it’s house to be divided at this critical time, said this is the time for the party to plan how to wrestle power come 2023.

He said :” At the end of the day ,the party must wrestle power from those in power now, that should be our priority and target”.

Igbabo who said the party is not having crisis but clash of interest, enthused that this is normal in party politics.

” We don’t have crisis in our party, what we have is just clash of interest, somebody wants this and another person wants that  and that is normal in party politics,it’s all about interest. It is interest that runs political participation,we really don’t have crisis” he stated.

He said that the party felt that it is high time they allowed constitutional provisions to take charge of issues that may arise in the party.

According to him:” And if you say somebody must go, it has to pass through the constitutional provisions of the party, it is high time we worked with it. This particular committee was inaugurated and set up the convention of the party through delegates.

” Even, if he says he (Ayu) would resign, he is doing that in his personal capacity , but the truth of the matter is that  the party will face much more than what it thinks it is trying to resolve” he said.

On if Governor Nyesom Wike is not right in his claim that Ayu must resign, he said “Everybody is entitled to his opinion, Ayu actually says he would resign but the circumstances did not support it because it will cause more harm than good, if he is going to resign, it will not be now because the time is inauspicious, it is ill-timed.

” And we are not saying that Governor Wike is not making sense too, he has the right, he is entitled to what he wants to say but we will not allow our house to be divided” he said.

He also said:” If Ayu resigns, we are talking about the Southern Chairmanship, it means that the deputy Chairman North who is to take charge after Ayu’s resignation must also resign, and if that happens, and if the party chairmanship comes to the South, the National Secretary will have to give up, this will muddle the whole thing up. It will create a lot of issues and problem.”