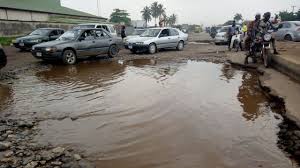 By Alice Odinde
|
Some residents and road users plying Oshinle/ Falodu axis within Akure metropolis have appealled to the state government to come to their rescue by patching potholes and ditches which they said have dotted the  areas.

In separate interviews with The Hope at the weekend, some residents who spoke about the roads, Mrs Olanrewaju, a business woman, Mr Adeniyi Alabi a commercial motorcyclist and Mr Sunday Abiola, a taxi driver, decried the bad state of the road and begged the state governor, Arakunrin Oluwarotimi Akeredolu to quickly intervene and repair the road to ease their suffering.

According to them, apart from the fact that the situation of the road has led to many avoidable accidents, it has also caused lots of damage to their vehicles.

They added that if government can come to their aid, it will put an end to the difficulties being faced by road users on daily basis.

The people however commended the state government for the ongoing repair and patching of roads within the state capital and called on it to extend the good gesture to their areas.

“The road here is bad. There are deep potholes everywhere and this is causing serious damage to our vehicles and motorcycles. In fact, it is really affecting our business here,” Olanrewaju said.