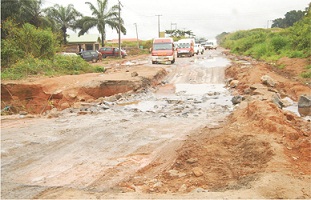 From Jimoh Ahmed, Ikare Akoko.
|
The people of Ajowa, Ikaram, Erusu and Arigidi Akoko, all in Akoko NorthWest local government area of Ondo state, have cried out to government and the appropriate agencies to bail them out on the abandoned Ajowa/Ikare road project. Some residents of the communities who spoke with The Hope stated that the deplorable condition of the abandoned sections have continued to give them sleepless nights. The Hope learnt that the contract for the road project was awarded some years ago by the former governor of the State, Dr Olusegun Mimiko. The construction firm started construction work on the road from Ikare end and stopped work at Agbaluku, Arigidi Akoko after laying the asphalt of just a distance of two kilometres only to abandon the section between Agbaluku, Imo and Erusu, also a distance of two kilometers, only to continue the project from Ikaram to Ajowa Akoko. The abandoned sections have become impassable due to the deplorable condition arising from the neglect. Efforts to speak with the officials of the construction firm was not successful as their office at Ajowa Akoko has been deserted and only few security guards were seen there. Speaking on the development, an Ikaram Akoko community leader, Alhaji Basiru Aminu disclosed that the non completion of the road has greatly affected progress of the communities in the area both socially and economically. Aminu said all vehicles passing through the road to the northern parts of the country now face lots of problems and often break down thereby causing hardship for other motorists and commuters. Similarly the regent of Akunu Akoko, Princess Olayinka Orogun who said the road is a vital link to Akunu,Ikakumo and the northern states called on government to ensure the contractor handling the project return to site.