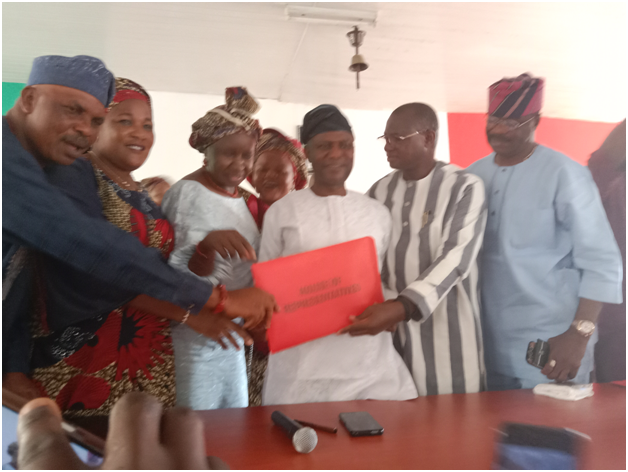 Former Chairman of Akoko North-East, Mr.Olalekan Bada has obtained the expression of interest and nomination forms to contest for Akoko North-East/North-West Federal Constituency seat under the platform of the Peoples Democratic Party (PDP), in Ondo State.

Speaking shortly after purchasing the forms, Bada explained that he joined the race to continue with the empowerment of his constituents.

The ex-chairman said he has strong record of impact and experience in making the Constituency witness better improvement.

Bada, said youths and women would be given special focus due to their importance in society.

“I will concentrate on youths because without them there is nothing that can be done in the country. They are the future of the country.

“The people of the Constituency l will teach how to fish not how to give them fish,” he said.

He said he was the only chairman across the 18 councils in the State who succeeded in buying new cabbage truck that is still functioning till now.

He pledged to develop the constituency with monumental projects that will stand the test of time.

According to him, the constituency which comprises of two local governments of North-East and North-West rotates the federal constituency seat since 1999 between the two councils based on agreement.

Bada affirmed that it is now the turn of the Akoko North-East Council to produce who occupies the seat in 2023 general elections.

While giving the reason for his decision to pursue his ambition on the platform of the PDP, he explained that the party has good political and economic record that favour Nigeria most.

“It is the plan of the PDP to bring the country from collapsed economy to healthy economy.

“My good work and achievements as former council chairman will speak for me as traditional rulers and indigenes appreciate laudable projects l put in place” he noted.