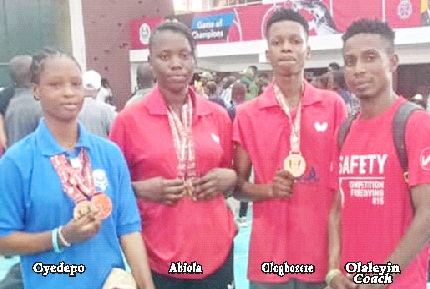 The debutant, Damilola Oyedepo emerged Most Valuable Player (MVP) in the Badminton at the 26th edition of the Universities games hosted by the University of Lagos (UNILAG) after she won a silver and a Bronze medal each in singles and doubles.

The AAUA 100 level Human Kinetic and health Education, Damilola Oyedepo who had not lost quarter final of any singles event since her debut in the racket game in 2019 National Youth Games in Ilorin.

She won gold in the singles event in her first attempt in 2019, defended same in 2021 and repeated same feat at the Abuja U -19 Championship early this year.

But lost 2-1 to All African Games medalist, Sofiat Obanisola at the NUGA which denied her of costing home a gold medals in singles event for the first time.

Tunmise Olalehin in a chat with Sporting Hope in Akure the state capital expressed delight in his players performance at the games.

Tunmise said both male and female players put up good fights at the Championship despite being their first attempt at the competition, saying their performance has shown they have good prospect in the racket game.

He said for Oyedepo to win bronze in singles event in the midst of Olympian, Aminat Ilori, the All African Games medalist, Sofiat Obanisola was a pointer to the fact that her MVP of the competition was not a ruse and well deserved.

The coach said “Spectators at the sporting arena was thinking Obanisola would beat her mercilessly but their great surprise she gave the experienced National player a tough game, that she narrowly defeat her 2-1 in the game of three.

“The fact is that the NUGA had given the young Badminton players from Ondo State an exposure ahead of other competition. The result of the games showed we have lot of work ahead of us going to National Sports Festival slated for Delta State later in the year.

“We have resumed training, we have known where to work on and we are going to address such as a matter of urgency,because going to Delta not to  make a number but to do our state proud by winning good for the state.”