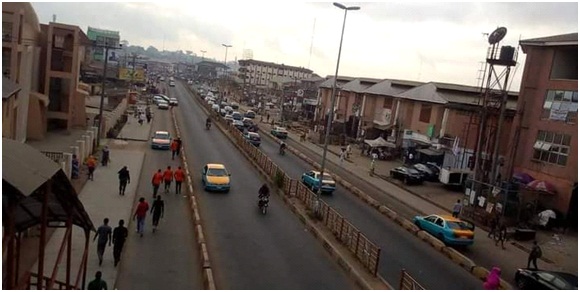 Shop owners, commuters and commercial drivers plying popular roads in Akure, the Ondo State capital have lauded the State Government for ridding the Oba Adesida, Arakale and NEPA roads of road side traders and hawkers who have turned the walkways to shops, preventing free flow of both human and vehicular movements.
Some of the commercial drivers who pleaded anonymity, commended the state government for clearing the roads as it has reduced traffic snarls.
In an interview with The Hope, a commercial motorcyclist, Mr Jolaade Bolu said government has done well, as they can now have a place to stay for easy access of their customers who found it difficult to locate them.
A shop owner at Oba Adedeji, who described the idea as a welcome one said his customers who found it difficult to reach him have been coming since the hawkers have been chased out of the road, saying his sales have improved.
Another shop owner posited that majority of those flouting the rules have rented shops in the main market but decided to hawk on the road thereby obstructing free flow of traffic.
He said government also built market for meat sellers but they would rather sell their wares on the road sides.
He therefore admonished the state government to build new market stalls that is cheaper, saying the Agagu market is too costly for some to rent.
Two residents, Mrs Ola Adeniran and Mrs Oguntoye Bosede commended the task force for its effort saying that traffic holdups on Oba Adesida and Arakale roads would become history.
Meanwhile, the state government has warned that any trader found displaying wares on walkways in Akure metropolis shall henceforth be arrested and prosecuted
The Senior Special Assistant to Governor Oluwarotimi Akeredolu on Special Duties and Strategy, Dr Doyin Odebowale gave the warning when he led the state’s task force on the clearance of road verges and walkways.
He said the ban on trading along the vehicular traffic lanes, pedestrian paths and walkways was aimed at instilling sanity especially in Akure, the state capital.
Odebowale decried how traders turned walkways in the state capital into “their warehouses,” obstructing the free flow of traffic.
According to him, “traders and artisans who have encroached on the main road and walkways in Arakale (Market) and Oja Oba along, Oba Adesida road, Akure, with their wares were directed to vacate such unauthorised trading spots or face arrest.
“The directive becames pertinent in view of the abuse and brazen disregard to the status of Akure, the state capital. It is particularly, a major source of concern that vehicular and pedestrian traffic now contend for space amid trading activities on same spots.
“Government emphasises that this move is in the interest of all residents, as the beauty or otherwise of our state capital speaks volume of our values as a people.”
He urged the people especially traders to show a high level of understanding for the general good of the citizens.