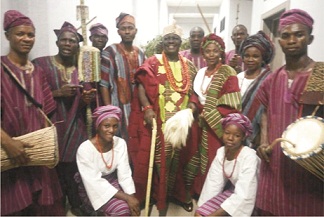 Battle of cultures as NAFEST comes to Benin City

By Adetokunbo Abiola
|
Ondo State didn’t come first at the recently concluded National Festival of Arts and Culture that took place in Benin City, Edo State. That accolade was grabbed by the contingent from Rivers State.

Ondo State did not win the most creative state award for design and presentation. Ekiti State, propelled   by its director general of arts and culture, Wale Opelara, won the award. Ondo State didn’t emerge winners in the traditional cuisine category. Delta State came out on top.

But Ondo State did emerge one of the winners of the drama category. Its director of drama, Dr Biratife Adesheye, made sure of that, presenting a play that frowned on the practice whereby traditional authority was overruled by the political class. Ondo State also emerged one of the winners in the children essay writing category. Its representative in the Ayo board game competition, Abiodun Olowolafe, also performed well. His coach, Ogunbiyi Joshua, tutored him very well. But if there had been an award category for simplicity and local content, Ondo State would have won hands down, because it had the most local content among the participating states.

Welcome to the National Festival of Arts and Culture (NAFEST) 2019, where the ancient town of Benin City was turned into a battle ground of cultures, with about thirty states competing to push their agenda forwards in the culture scene.

NAFEST had its origin in various art and culture festivals that took place in Nigeria in the 60s, metamorphosing into the All Nigeria Festival of Arts, an affair that marked the reintegration of the Eastern Region into Nigeria after the civil war in 1969. NAFEST started in 1970, and since then, thirty one editions have been held. Most of the editions include drama, traditional board games, quiz, children’s poetry and craft competitions, etc.

The programme started with an official opening ceremony at the University of Benin Sports Complex, Ugbowo, with Ondo State taking part in the march past in very colorful attires. The state didn’t win the category, because Edo, Delta , Rivers, Gombe and Bornu stole the diadem. Tu Face Idibia sang at the opening ceremony, belting out his evergreen hits in the last one-and-a-half decades. Otunba Segun Runsewe, the Director General of the National Council of Arts and Culture (NCAC), was among the dignitaries to welcome thousand of the people who congregated at the festival.

The free-skills acquisition training (free medical services) segment was an important ingredient at this year’s festival. According to Runsewe, the segment was aimed at connecting with youths as quickly as possible for a better future for the country. The segment featured  James Ifensinachi, who was labeled Nigeria’s youngest photographer. Florence Robinson also featured prominently, for using the frying and sale of bean cakes as a tool for economic emancipation. Director  Lancelot Imaseun, the noted Nollywood director and producer, was the third person to feature in the free-skills  segment. Lots of children, some from Ondo State, benefitted from the free-skills acquisition segment. It was held at the basement of the Sani Abacha Cultural Centre, and you could see youths taught by experts in activities such as shoe-making, hair dressing, doll making, barbing and other activities designed to create a new class of entrepreneurs in the next few years.

The theme of this year’s NAFEST was coined around having pride in royalty, so it was no surprise that the smell of royalty was thick during the official opening  ceremony of  the  indigenous fabric in royal apparel competition.

According to the narrator, princes and princesses in the court of the Osemawe wear the senior alari, with the prince adorned in a cap bent to the right side of their head. The royal guards also wear alari, but they wear the junior alari.  The queen wears the Olomolangidi dress, a combination of alari and Olomolanigdi. According to one of the participants from Ondo State, the Olomolangidi is a design not unlike Pablo Picasso’s cubism, a representation of people in triangles and rectangles, sewn into the senior alari. Only the Osemawe and his queen have the Olomolangidi sewn into their alari. The alari, Olomolangidi, the shoes of the queen and Osemawe are not imported. They are made locally in the Ondo Kingdom, a fact that was in tune with the aim of the festival, how to make the nation’s cultural products to be locally created.

Another essential part of NAFEST was the traditional sports competition. According to Joshua Ogunbiyi, traditional sports in Nigeria included Langa , Abula, Africa Billard and Ayo. And its serious business, because Ogunbiyi had spent one year at the National Institute of Sports in Lagos to master these sports. It is serious business, once again, because the event had a female competitor from Bayelsa State, Matilda Biseimo, who beat her Nassarawa State counterpart. According to Matilda, Ayo is not just for the male gender, it is for the female gender too. She informed this reporter that lots of females in Bayelsa also played the game.

Obviously, females dominated the traditional cuisine competition, and if anything forces you to salivate at the fiesta, it is the thick aroma of food at the venue of the event, the National Museum. Ondo State served a royal cuisine consisting of goat pepper soup; pounded yam; a soup having Isakpa, smoked bush meat and palm wine kept in a gourd. Adewale Feyishayo said that this was the  royal dish of the Osemawe of Ondo Kingdom. The porcelain used to serve the food hacked back to the 50s and 60s, and this pleased Runsewe, when he came to the stand of Ondo State. The food is also served in dish made from wood. Earlier at the opening of the cuisine contest, the chairman of the event, Professor Ayakroma Barclays, said he liked his traditional food to be natural. The food presented by Ondo State was natural.

But the food presented by some of the states were not natural, as they had been packaged  for commercial purposes, placed in plastics, and they looked chemicalised. This was especially true of cusines from states such as Jigawa, Kaduna, Bauchi and the rest from the north. It would appear the packaged food were made  that way to facilitate export, but Runsewe was quick to advise that such foods needed NAFDAC approval. Still, the segment showed the rich variety of Nigerian foods, and it did not really matter if the foods were meant for royalty.

Ondo State showed a strong presence in the drama category, and it’s no wonder they showed such a presence, because the director of its drama, Adesheye, had strong views about the state’s entry. It’s based on the Okpa Ase, the staff of office. Adesheye said royalty could be autonomous if the Okpa Ase was given to them by politicians, because it meant they would be answerable only to politicians. Adesheye was strongly of the view that politicians shouldn’t annex the power of royalty. The judges agreed with Adesheye’s view also, awarding Ondo the second position in drama

The theme of royalty was evident in the sculptures displayed at the event. Unfortunately, it was all about public sculptures from Edo State artists. There was Felix Idobor’s General Eboikinmuwan, Leo Oronsaye’s Oba Eware, Lawrence Omoregie’s Muen Muen, Victor Uwaifo’s Trial of Ovonramwem, Ayo Idubor’s Consul James Phillips, Bello Kuranga’s Asoro, Funke Ifeta’s Benin Chief, John Danford’s Emotan. You search for sculpture from Ondo State, but your search is in vain, because there  were no sculptures. Ondo State wasn’t the only state at fault here, because the same thing happened to virtually all the other states in the country.

Professor Ononome of the University of Benin gave  reasons for this, saying the sculptures  was a way for NCAC to celebrate Edo State public sculptures.  “People didn’t relate with the public sculptures,”  he said, “but they’re now relatable. NCAC decided to display them for ease of identification for posterity. All these sculptures were public  sculptures in Benin City.”

However, other states showed their presence in the segment for art and craft. They showed their craft  through  shops for adire, shops for dashikis, shops for buba and Ankara; there was even a stall for Ghana’s kente products. There was a theme one could derive from the arts and crafts on display, the theme of transforming cultural symbols into commercial opportunities as a vehicle for job creation.

The royal splendor of the Oba of Benin was another opportunity for states to showcase their culture during the festival. It was a fortuitous event, because NAFEST was holding just as the Oba of Benin was celebrating the anniversary of his enthronement. Ondo State women appeared in blue blouse and wrapper, along with multi-layered beads, while the men dressed in alari. The director of the contingent was Yemi Olakojo. She told this reporter, “Birikpoi is the name of the dance we have for the Oba at Benin. It is found in Ikale area of Ondo State. The message we want to convey is unity. Everywhere is home. Let everywhere be as though it’s your home. Don’t see yourself as a second-class citizen.”

On the last day of the festival, it was an arguable point, because it looked as though all the participants didn’t see themselves as strangers in Edo State. The music of Edo musicians such as Victor Uwaifo, Bayo Ade, Joseph Osayomore, Sister Naomi and others shared space with the music by artistes from Jigawa and Kaduna State. Participants from all the states in the federation didn’t wear their elaborate costumes as though they were strangers, they wore them as though they were wearing them in their home states.

“NAFEST underscores the need for cultural exchange,” said Philip Shaibu, the Deputy Governor of Edo State, while closing the fiesta. “It is an opportunity to bring to the fore our cultural diversity. It deepens our unity and broadens our perspective. It gives us an opportunity for job creation for the teeming population of unemployed youths.”